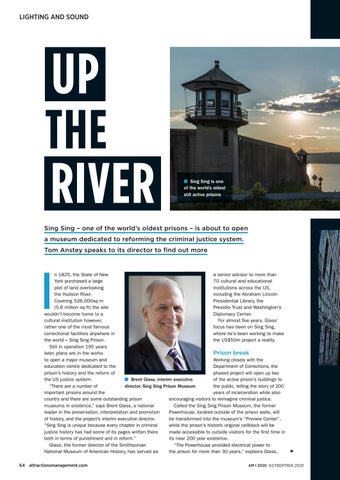 Sing Sing – one of the world’s oldest prisons – is about to open a museum dedicated to reforming the criminal justice system. tom anstey speaks to its director to ﬁnd out more

n 1825, the State of New a senior advisor to more than York purchased a large 70 cultural and educational plot of land overlooking institutions across the US, the Hudson River. including the Abraham Lincoln Covering 526,000sq m Presidential Library, the (5.6 million sq ft) the site Presidio Trust and Washington’s wouldn’t become home to a Diplomacy Center. For almost five years, Glass’ cultural institution however, focus has been on Sing Sing, rather one of the most famous where he’s been working to make correctional facilities anywhere in the US$50m project a reality. the world – Sing Sing Prison. Still in operation 195 years prison break later, plans are in the works Working closely with the to open a major museum and Department of Corrections, the education centre dedicated to the phased project will open up two prison’s history and the reform of n Brent Glass, interim executive of the active prison’s buildings to the US justice system. “There are a number of director, Sing Sing Prison Museum the public, telling the story of 200 important prisons around the years of incarceration while also country and there are some outstanding prison encouraging visitors to reimagine criminal justice. Called the Sing Sing Prison Museum, the former museums in existence,” says Brent Glass, a national Powerhouse, located outside of the prison walls, will leader in the preservation, interpretation and promotion be transformed into the museum’s “Preview Center”, of history, and the project’s interim executive director. while the prison’s historic original cellblock will be “Sing Sing is unique because every chapter in criminal made accessible to outside visitors for the first time in justice history has had some of its pages written there its near 200 year existence. both in terms of punishment and in reform.” Glass, the former director of the Smithsonian “The Powerhouse provided electrical power to National Museum of American History, has served as the prison for more than 30 years,” explains Glass.