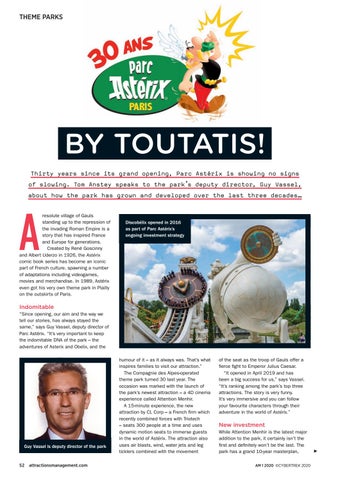 BY TOUTATIS! Thirty years since its grand opening, Parc Astérix is showing no signs of slowing. Tom Anstey speaks to the park’s deputy director, Guy Vassel, about how the park has grown and developed over the last three decades…

resolute village of Gauls standing up to the repression of the invading Roman Empire is a story that has inspired France and Europe for generations. Created by René Goscinny and Albert Uderzo in 1926, the Astérix comic book series has become an iconic part of French culture, spawning a number of adaptations including videogames, movies and merchandise. In 1989, Astérix even got his very own theme park in Plailly on the outskirts of Paris.

Indomitable “Since opening, our aim and the way we tell our stories, has always stayed the same,” says Guy Vassel, deputy director of Parc Astérix. “It’s very important to keep the indomitable DNA of the park – the adventures of Asterix and Obelix, and the

Guy Vassel is deputy director of the park

humour of it – as it always was. That’s what inspires families to visit our attraction.” The Compagnie des Alpes-operated theme park turned 30 last year. The occasion was marked with the launch of the park’s newest attraction – a 4D cinema experience called Attention Menhir. A 15-minute experience, the new attraction by CL Corp – a French firm which recently combined forces with Triotech – seats 300 people at a time and uses dynamic motion seats to immerse guests in the world of Astérix. The attraction also uses air blasts, wind, water jets and leg ticklers combined with the movement

of the seat as the troop of Gauls offer a fierce fight to Emperor Julius Caesar. “It opened in April 2019 and has been a big success for us,” says Vassel. “It’s ranking among the park’s top three attractions. The story is very funny. It’s very immersive and you can follow your favourite characters through their adventure in the world of Astérix.”

New investment While Attention Menhir is the latest major addition to the park, it certainly isn’t the first and definitely won’t be the last. The park has a grand 10-year masterplan, AM 1 2020 ©Cybertrek 2020