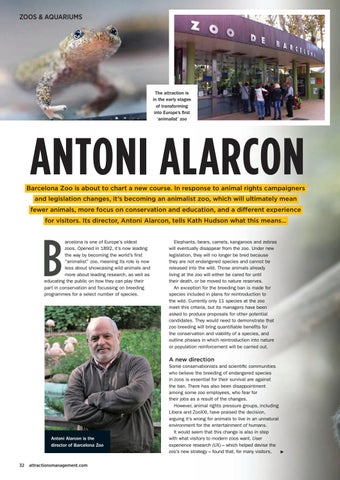 ANTONI ALARCON barcelona Zoo is about to chart a new course. in response to animal rights campaigners and legislation changes, it’s becoming an animalist zoo, which will ultimately mean fewer animals, more focus on conservation and education, and a diﬀerent experience for visitors. its director, antoni alarcon, tells Kath hudson what this means…

arcelona is one of Europe’s oldest zoos. Opened in 1892, it’s now leading the way by becoming the world’s first “animalist” zoo, meaning its role is now less about showcasing wild animals and more about leading research, as well as educating the public on how they can play their part in conservation and focussing on breeding programmes for a select number of species.

Elephants, bears, camels, kangaroos and zebras will eventually disappear from the zoo. Under new legislation, they will no longer be bred because they are not endangered species and cannot be released into the wild. Those animals already living at the zoo will either be cared for until their death, or be moved to nature reserves. An exception for the breeding ban is made for species included in plans for reintroduction to the wild. Currently only 11 species at the zoo meet this criteria, but its managers have been asked to produce proposals for other potential candidates. They would need to demonstrate that zoo breeding will bring quantifiable benefits for the conservation and viability of a species, and outline phases in which reintroduction into nature or population reinforcement will be carried out.

Antoni Alarcon is the director of Barcelona Zoo

Some conservationists and scientific communities who believe the breeding of endangered species in zoos is essential for their survival are against the ban. There has also been disappointment among some zoo employees, who fear for their jobs as a result of the changes. However, animal rights pressure groups, including Libera and ZooXXI, have praised the decision, arguing it’s wrong for animals to live in an unnatural environment for the entertainment of humans. It would seem that this change is also in step with what visitors to modern zoos want. User experience research (UX) – which helped devise the zoo’s new strategy – found that, for many visitors, AM 1 2020 ©Cybertrek 2020