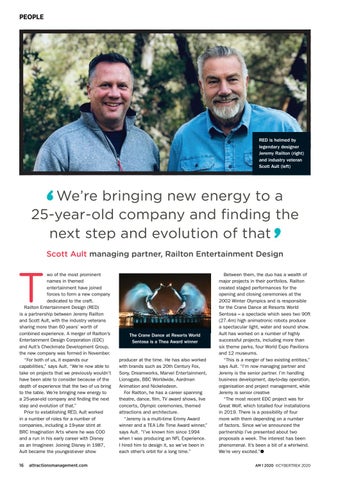 wo of the most prominent names in themed entertainment have joined forces to form a new company dedicated to the craft. Railton Entertainment Design (RED) is a partnership between Jeremy Railton and Scott Ault, with the industry veterans sharing more than 60 years’ worth of combined experience. A merger of Railton’s Entertainment Design Corporation (EDC) and Ault’s Checkmate Development Group, the new company was formed in November. “For both of us, it expands our capabilities,” says Ault. “We’re now able to take on projects that we previously wouldn’t have been able to consider because of the depth of experience that the two of us bring to the table. We’re bringing new energy to a 25-year-old company and finding the next step and evolution of that.” Prior to establishing RED, Ault worked in a number of roles for a number of companies, including a 19-year stint at BRC Imagination Arts where he was COO and a run in his early career with Disney as an Imagineer. Joining Disney in 1987, Ault became the youngest-ever show

producer at the time. He has also worked with brands such as 20th Century Fox, Sony, Dreamworks, Marvel Entertainment, Lionsgate, BBC Worldwide, Aardman Animation and Nickelodeon. For Railton, he has a career spanning theatre, dance, film, TV award shows, live concerts, Olympic ceremonies, themed attractions and architecture. “Jeremy is a multi-time Emmy Award winner and a TEA Life Time Award winner,” says Ault. “I’ve known him since 1994 when I was producing an NFL Experience. I hired him to design it, so we’ve been in each other’s orbit for a long time.”

Between them, the duo has a wealth of major projects in their portfolios. Railton created staged performances for the opening and closing ceremonies at the 2002 Winter Olympics and is responsible for the Crane Dance at Resorts World Sentosa – a spectacle which sees two 90ft (27.4m) high animatronic robots produce a spectacular light, water and sound show. Ault has worked on a number of highly successful projects, including more than six theme parks, four World Expo Pavilions and 12 museums. “This is a merger of two existing entities,” says Ault. “I’m now managing partner and Jeremy is the senior partner. I’m handling business development, day-to-day operation, organisation and project management, while Jeremy is senior creative “The most recent EDC project was for Great Wolf, which totalled four installations in 2019. There is a possibility of four more with them depending on a number of factors. Since we’ve announced the partnership I’ve presented about two proposals a week. The interest has been phenomenal. It’s been a bit of a whirlwind. We’re very excited.”l AM 1 2020 ©Cybertrek 2020