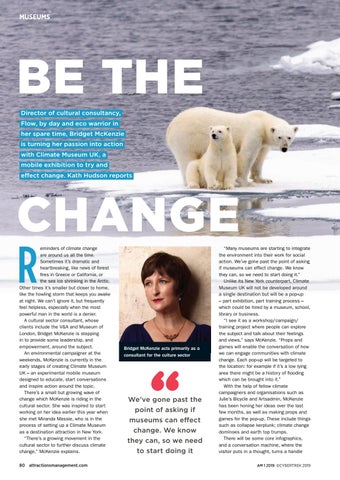 BE THE Director of cultural consultancy, Flow, by day and eco warrior in her spare time, Bridget McKenzie is turning her passion into action with Climate Museum UK, a mobile exhibition to try and effect change. Kath Hudson reports

eminders of climate change are around us all the time. Sometimes it’s dramatic and heartbreaking, like news of forest fires in Greece or California, or the sea ice shrinking in the Arctic. Other times it’s smaller but closer to home, like the howling storm that keeps you awake at night. We can’t ignore it, but frequently feel helpless, especially when the most powerful man in the world is a denier. A cultural sector consultant, whose clients include the V&A and Museum of London, Bridget McKenzie is stepping in to provide some leadership, and empowerment, around the subject. An environmental campaigner at the weekends, McKenzie is currently in the early stages of creating Climate Museum UK – an experimental mobile museum designed to educate, start conversations and inspire action around the topic. There’s a small but growing wave of change which McKenzie is riding in the cultural sector. She was inspired to start working on her idea earlier this year when she met Miranda Massie, who is in the process of setting up a Climate Museum as a destination attraction in New York. “There’s a growing movement in the cultural sector to further discuss climate change,” McKenzie explains. 80 attractionsmanagement.com

Bridget McKenzie acts primarily as a consultant for the culture sector

We’ve gone past the point of asking if museums can effect change. We know they can, so we need to start doing it

“Many museums are starting to integrate the environment into their work for social action. We’ve gone past the point of asking if museums can effect change. We know they can, so we need to start doing it.” Unlike its New York counterpart, Climate Museum UK will not be developed around a single destination but will be a pop-up – part exhibition, part training process – which could be hired by a museum, school, library or business. “I see it as a workshop/campaign/ training project where people can explore the subject and talk about their feelings and views,” says McKenzie. “Props and games will enable the conversation of how we can engage communities with climate change. Each pop-up will be targeted to the location: for example if it’s a low lying area there might be a history of flooding which can be brought into it.” With the help of fellow climate campaigners and organisations such as Julie’s Bicycle and Artsadmin, McKenzie has been honing her ideas over the last few months, as well as making props and games for the pop-up. These include things such as collapse kerplunk; climate change dominoes and earth top trumps. There will be some core infographics, and a conversation machine, where the visitor puts in a thought, turns a handle AM 1 2019 ©Cybertrek 2019