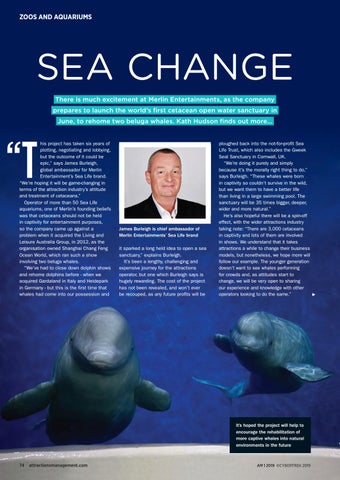 SEA CHANGE there is much excitement at merlin entertainments, as the company prepares to launch the world’s ﬁrst cetacean open water sanctuary in June, to rehome two beluga whales. kath hudson ﬁnds out more…

his project has taken six years of plotting, negotiating and lobbying, but the outcome of it could be epic,” says James Burleigh, global ambassador for Merlin Entertainment’s Sea Life brand. “We’re hoping it will be game-changing in terms of the attraction industry’s attitude and treatment of cetaceans.” Operator of more than 50 Sea Life aquariums, one of Merlin’s founding beliefs was that cetaceans should not be held in captivity for entertainment purposes, so the company came up against a problem when it acquired the Living and Leisure Australia Group, in 2012, as the organisation owned Shanghai Chang Feng Ocean World, which ran such a show involving two beluga whales. “We’ve had to close down dolphin shows and rehome dolphins before - when we acquired Gardaland in Italy and Heidepark in Germany - but this is the first time that whales had come into our possession and

James Burleigh is chief ambassador of Merlin Entertainments’ Sea Life brand it sparked a long held idea to open a sea sanctuary,” explains Burleigh. It’s been a lengthy, challenging and expensive journey for the attractions operator, but one which Burleigh says is hugely rewarding. The cost of the project has not been revealed, and won’t ever be recouped, as any future profits will be

ploughed back into the not-for-profit Sea Life Trust, which also includes the Gweek Seal Sanctuary in Cornwall, UK. “We’re doing it purely and simply because it’s the morally right thing to do,” says Burleigh. “These whales were born in captivity so couldn’t survive in the wild, but we want them to have a better life than living in a large swimming pool. The sanctuary will be 35 times bigger, deeper, wider and more natural.” He’s also hopeful there will be a spin-off effect, with the wider attractions industry taking note: “There are 3,000 cetaceans in captivity and lots of them are involved in shows. We understand that it takes attractions a while to change their business models, but nonetheless, we hope more will follow our example. The younger generation doesn’t want to see whales performing for crowds and, as attitudes start to change, we will be very open to sharing our experience and knowledge with other operators looking to do the same.”