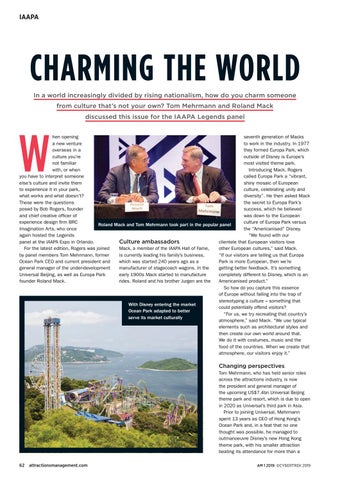 Charming the World In a world increasingly divided by rising nationalism, how do you charm someone from culture that’s not your own? Tom Mehrmann and Roland Mack discussed this issue for the IAAPA Legends panel

hen opening seventh generation of Macks a new venture to work in the industry. In 1977 overseas in a they formed Europa Park, which culture you’re outside of Disney is Europe’s not familiar most visited theme park. Introducing Mack, Rogers with, or when called Europa Park a “vibrant, you have to interpret someone shiny mosaic of European else’s culture and invite them culture, celebrating unity and to experience it in your park, diversity”. He then asked Mack what works and what doesn’t? the secret to Europa Park’s These were the questions success, which he believed posed by Bob Rogers, founder was down to the European and chief creative officer of culture of Europa Park versus experience design firm BRC Roland Mack and Tom Mehrmann took part in the popular panel the “Americanised” Disney. Imagination Arts, who once “We found with our again hosted the Legends Culture ambassadors clientele that European visitors love panel at the IAAPA Expo in Orlando. Mack, a member of the IAAPA Hall of Fame, other European cultures,” said Mack. For the latest edition, Rogers was joined is currently leading his family’s business, “If our visitors are telling us that Europa by panel members Tom Mehrmann, former which was started 240 years ago as a Park is more European, then we’re Ocean Park CEO and current president and manufacturer of stagecoach wagons. In the getting better feedback. It’s something general manager of the under-development early 1900s Mack started to manufacture completely different to Disney, which is an Universal Beijing, as well as Europa Park rides. Roland and his brother Jurgen are the Americanised product.” founder Roland Mack. So how do you capture this essence of Europe without falling into the trap of stereotyping a culture – something that With Disney entering the market could potentially offend visitors? Ocean Park adapted to better “For us, we try recreating that country’s serve its market culturally atmosphere,” said Mack. “We use typical elements such as architectural styles and then create our own world around that. We do it with costumes, music and the food of the countries. When we create that atmosphere, our visitors enjoy it.”

Changing perspectives Tom Mehrmann, who has held senior roles across the attractions industry, is now the president and general manager of the upcoming US$7.4bn Universal Beijing theme park and resort, which is due to open in 2020 as Universal’s third park in Asia. Prior to joining Universal, Mehrmann spent 13 years as CEO of Hong Kong’s Ocean Park and, in a feat that no one thought was possible, he managed to outmanoeuvre Disney’s new Hong Kong theme park, with his smaller attraction beating its attendance for more than a 62