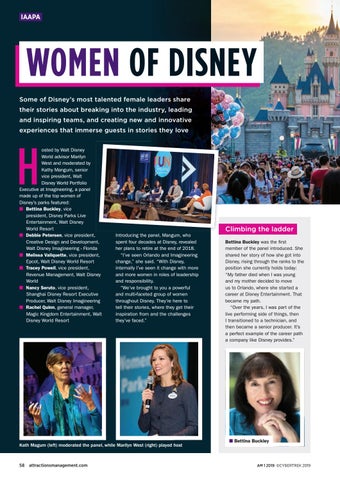 WOMEN OF DISNEY Some of Disney’s most talented female leaders share their stories about breaking into the industry, leading and inspiring teams, and creating new and innovative experiences that immerse guests in stories they love

Introducing the panel, Mangum, who spent four decades at Disney, revealed her plans to retire at the end of 2018. “I’ve seen Orlando and Imagineering change,” she said. “With Disney, internally I’ve seen it change with more and more women in roles of leadership and responsibility. “We’ve brought to you a powerful and multi-faceted group of women throughout Disney. They’re here to tell their stories, where they get their inspiration from and the challenges they’ve faced.”

Climbing the ladder Bettina Buckley was the first member of the panel introduced. She shared her story of how she got into Disney, rising through the ranks to the position she currently holds today: “My father died when I was young and my mother decided to move us to Orlando, where she started a career at Disney Entertainment. That became my path. “Over the years, I was part of the live performing side of things, then I transitioned to a technician, and then became a senior producer. It’s a perfect example of the career path a company like Disney provides.”