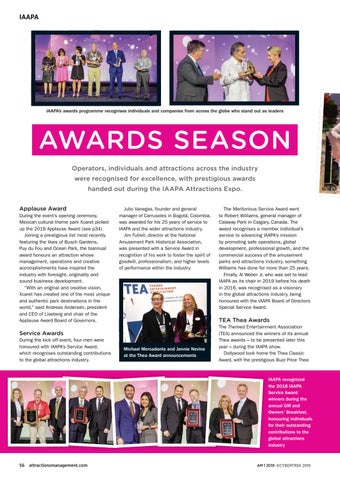 AWARDS SEASON Operators, individuals and attractions across the industry were recognised for excellence, with prestigious awards handed out during the IAAPA Attractions Expo. Applause Award During the event’s opening ceremony, Mexican cultural theme park Xcaret picked up the 2018 Applause Award (see p34). Joining a prestigious list most recently featuring the likes of Busch Gardens, Puy du Fou and Ocean Park, the biannual award honours an attraction whose management, operations and creative accomplishments have inspired the industry with foresight, originality and sound business development. “With an original and creative vision, Xcaret has created one of the most unique and authentic park destinations in the world,” said Andreas Andersen, president and CEO of Liseberg and chair of the Applause Award Board of Governors.

Julio Vanegas, founder and general manager of Carruseles in Bogotá, Colombia, was awarded for his 25 years of service to IAAPA and the wider attractions industry. Jim Futrell, director at the National Amusement Park Historical Association, was presented with a Service Award in recognition of his work to foster the spirit of goodwill, professionalism, and higher levels of performance within the industry.

Service Awards During the kick off event, four men were honoured with IAAPA’s Service Award, which recognises outstanding contributions to the global attractions industry.

The Meritorious Service Award went to Robert Williams, general manager of Calaway Park in Calgary, Canada. The award recognises a member individual’s service to advancing IAAPA’s mission by promoting safe operations, global development, professional growth, and the commercial success of the amusement parks and attractions industry, something Williams has done for more than 25 years. Finally, Al Weber Jr, who was set to lead IAAPA as its chair in 2019 before his death in 2016, was recognised as a visionary in the global attractions industry, being honoured with the IAAPA Board of Directors Special Service Award.

Michael Mercadante and Jennie Nevine at the Thea Award announcements

The Themed Entertainment Association (TEA) announced the winners of its annual Thea awards – to be presented later this year – during the IAAPA show. Dollywood took home the Thea Classic Award, with the prestigious Buzz Price Thea

IAAPA recognized the 2018 IAAPA Service Award winners during the annual GM and Owners’ Breakfast, honouring individuals for their outstanding contributions to the global attractions industry