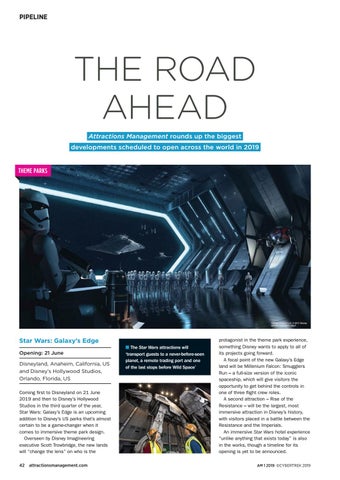 Star Wars: Galaxy’s Edge Opening: 21 June Disneyland, Anaheim, California, US and Disney’s Hollywood Studios, Orlando, Florida, US Coming first to Disneyland on 21 June 2019 and then to Disney’s Hollywood Studios in the third quarter of the year, Star Wars: Galaxy’s Edge is an upcoming addition to Disney’s US parks that’s almost certain to be a game-changer when it comes to immersive theme park design. Overseen by Disney Imagineering executive Scott Trowbridge, the new lands will “change the lens” on who is the 42 attractionsmanagement.com

n The Star Wars attractions will ‘transport guests to a never-before-seen planet, a remote trading port and one of the last stops before Wild Space’

protagonist in the theme park experience, something Disney wants to apply to all of its projects going forward. A focal point of the new Galaxy’s Edge land will be Millenium Falcon: Smugglers Run – a full-size version of the iconic spaceship, which will give visitors the opportunity to get behind the controls in one of three flight crew roles. A second attraction – Rise of the Resistance – will be the largest, most immersive attraction in Disney’s history, with visitors placed in a battle between the Resistance and the Imperials. An immersive Star Wars hotel experience “unlike anything that exists today” is also in the works, though a timeline for its opening is yet to be announced. AM 1 2019 ©Cybertrek 2019