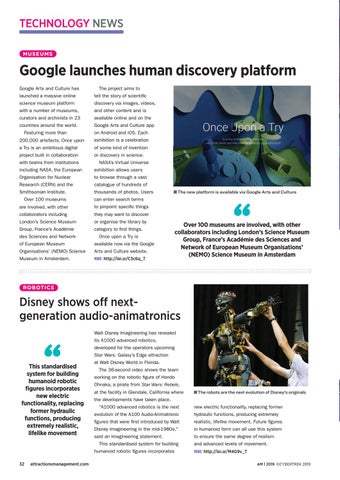 The project aims to

tell the story of scientific

with a number of museums,

curators and archivists in 23

available online and on the

countries around the world.

on Android and iOS. Each

exhibition is a celebration

a Try is an ambitious digital

of some kind of invention

or discovery in science.

with teams from institutions

including NASA, the European

to browse through a vast

Research (CERN) and the

catalogue of hundreds of

Over 100 museums are involved, with other

they may want to discover

or organise the library by

■■The new platform is available via Google Arts and Culture

Once upon a Try is

available now via the Google

at Walt Disney World in Florida. The 36-second video shows the team working on the robotic figure of Hondo Ohnaka, a pirate from Star Wars: Rebels, at the facility in Glendale, California where the developments have taken place. “A1000 advanced robotics is the next

figures that were first introduced by Walt

Disney Imagineering in the mid-1980s,"

in humanoid form can all use this system

to ensure the same degree of realism

evolution of the A100 Audio-Animatronic

This standardised system for building

■■The robots are the next evolution of Disney's originals