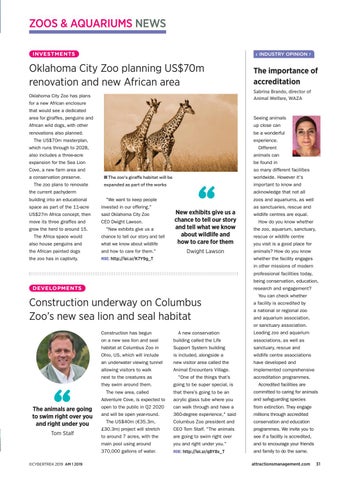 The importance of accreditation

for a new African enclosure that would see a dedicated area for giraffes, penguins and

African wild dogs, with other

be a wonderful experience.

which runs through to 2028, also includes a three-acre

expansion for the Sea Lion

be found in so many different facilities

Cove, a new farm area and a conservation preserve. The zoo plans to renovate

■■The zoo's giraffe habitat will be

expanded as part of the works

important to know and acknowledge that not all

the current pachyderm building into an educational

zoos and aquariums, as well

"We want to keep people

space as part of the 11-acre

invested in our offering,"

move its three giraffes and

what we know about wildlife

and how to care for them."

the zoo has in captivity.

grow the herd to around 15. The Africa space would also house penguins and

You can check whether a facility is accredited by a national or regional zoo and aquarium association, or sanctuary association.

on a new sea lion and seal

associations, as well as

habitat at Columbus Zoo in

Ohio, US, which will include

is included, alongside a

next to the creatures as

"One of the things that’s

they swim around them.

going to be super special, is

that there’s going to be an

committed to caring for animals

Adventure Cove, is expected to

acrylic glass tube where you

can walk through and have a

from extinction. They engage

and will be open year-round.

programmes. We invite you to

to around 7 acres, with the

are going to swim right over

see if a facility is accredited,

you and right under you."

and to encourage your friends

and family to do the same.