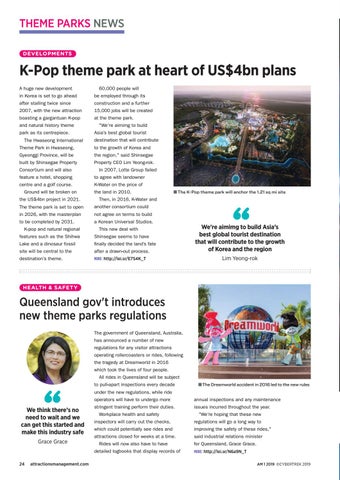 in Korea is set to go ahead

be employed through its

after stalling twice since

construction and a further

at the theme park.

and natural history theme park as its centrepiece. The Hwaseong International

to the growth of Korea and

Gyeonggi Province, will be

Consortium and will also

to agree with landowner

centre and a golf course.

K-Water on the price of

The theme park is set to open

This new deal with

features such as the Shihwa

Shinsegae seems to have

Lake and a dinosaur fossil

site will be central to the

after a drawn-out process.

queensland gov't introduces new theme parks regulations The government of Queensland, Australia, has announced a number of new regulations for any visitor attractions operating rollercoasters or rides, following the tragedy at Dreamworld in 2016 which took the lives of four people. All rides in Queensland will be subject to pull-apart inspections every decade

■The ■ Dreamworld accident in 2016 led to the new rules

under the new regulations, while ride

operators will have to undergo more

annual inspections and any maintenance

issues incurred throughout the year.

regulations will go a long way to

which could potentially see rides and

improving the safety of these rides,"

attractions closed for weeks at a time.

"We’re hoping that these new

inspectors will carry out the checks,