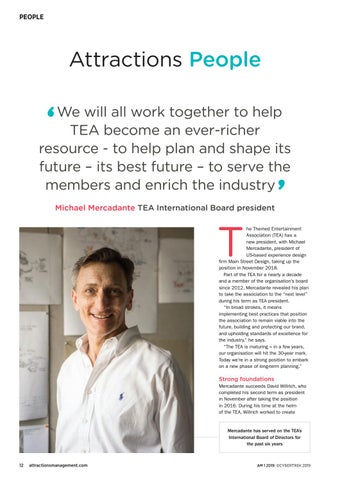 he Themed Entertainment Association (TEA) has a new president, with Michael Mercadante, president of US-based experience design firm Main Street Design, taking up the position in November 2018. Part of the TEA for a nearly a decade and a member of the organisation’s board since 2012, Mercadante revealed his plan to take the association to the “next level” during his term as TEA president. “In broad strokes, it means implementing best practices that position the association to remain viable into the future, building and protecting our brand, and upholding standards of excellence for the industry,” he says. “The TEA is maturing – in a few years, our organisation will hit the 30-year mark. Today we’re in a strong position to embark on a new phase of long-term planning.”

Strong foundations Mercadante succeeds David Willrich, who completed his second term as president in November after taking the position in 2016. During his time at the helm of the TEA, Willrich worked to create