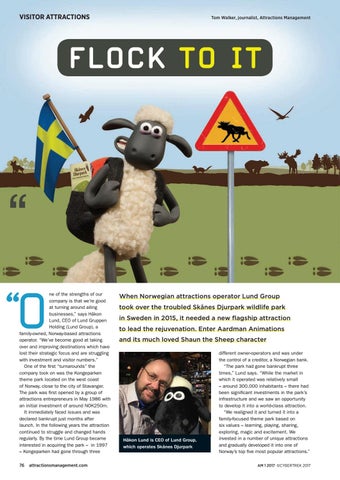 ne of the strengths of our company is that we’re good at turning around ailing businesses,” says Håkon Lund, CEO of Lund Gruppen Holding (Lund Group), a family-owned, Norway-based attractions operator. “We’ve become good at taking over and improving destinations which have lost their strategic focus and are struggling with investment and visitor numbers.” One of the first “turnarounds” the company took on was the Kongeparken theme park located on the west coast of Norway, close to the city of Stavanger. The park was first opened by a group of attractions entrepreneurs in May 1986 with an initial investment of around NOK250m. It immediately faced issues and was declared bankrupt just months after launch. In the following years the attraction continued to struggle and changed hands regularly. By the time Lund Group became interested in acquiring the park – in 1997 – Kongeparken had gone through three 76

When Norwegian attractions operator Lund Group took over the troubled Skånes Djurpark wildlife park in Sweden in 2015, it needed a new flagship attraction to lead the rejuvenation. Enter Aardman Animations and its much loved Shaun the Sheep character

different owner-operators and was under the control of a creditor, a Norwegian bank. “The park had gone bankrupt three times,” Lund says. “While the market in which it operated was relatively small – around 300,000 inhabitants – there had been significant investments in the park’s infrastructure and we saw an opportunity to develop it into a world-class attraction. “We realigned it and turned it into a family-focused theme park based on six values – learning, playing, sharing, exploring, magic and excitement. We invested in a number of unique attractions and gradually developed it into one of Norway’s top five most popular attractions.” AM 1 2017 ©Cybertrek 2017