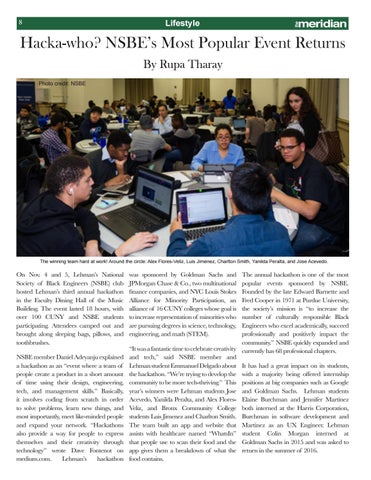 On Nov. 4 and 5, Lehman’s National Society of Black Engineers (NSBE) club hosted Lehman’s third annual hackathon in the Faculty Dining Hall of the Music Building. The event lasted 18 hours, with over 100 CUNY and NSBE students participating. Attendees camped out and brought along sleeping bags, pillows, and toothbrushes. NSBE member Daniel Adeyanju explained a hackathon as an “event where a team of people create a product in a short amount of time using their design, engineering, tech, and management skills.” Basically, it involves coding from scratch in order to solve problems, learn new things, and most importantly, meet like-minded people and expand your network. “Hackathons also provide a way for people to express themselves and their creativity through technology” wrote Dave Fontenot on medium.com. Lehman’s hackathon

was sponsored by Goldman Sachs and JPMorgan Chase &amp; Co., two multinational finance companies, and NYC Louis Stokes Alliance for Minority Participation, an alliance of 16 CUNY colleges whose goal is to increase representation of minorities who are pursuing degrees in science, technology, engineering, and math (STEM).

The annual hackathon is one of the most popular events sponsored by NSBE. Founded by the late Edward Barnette and Fred Cooper in 1971 at Purdue University, the society’s mission is “to increase the number of culturally responsible Black Engineers who excel academically, succeed professionally and positively impact the community.” NSBE quickly expanded and “It was a fantastic time to celebrate creativity currently has 68 professional chapters. and tech,” said NSBE member and Lehman student Emmanuel Delgado about It has had a great impact on its students, the hackathon. “We’re trying to develop the with a majority being offered internship community to be more tech-thriving.” This positions at big companies such as Google year’s winners were Lehman students Jose and Goldman Sachs. Lehman students Acevedo, Yanilda Peralta, and Alex Flores- Elaine Burchman and Jennifer Martinez Veliz, and Bronx Community College both interned at the Harris Corporation, students Luis Jimenez and Charlton Smith. Burchman in software development and The team built an app and website that Martinez as an UX Engineer. Lehman assists with healthcare named “WhatsIn” student Colin Morgan interned at that people use to scan their food and the Goldman Sachs in 2015 and was asked to app gives them a breakdown of what the return in the summer of 2016. food contains. 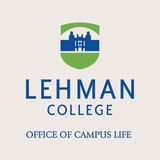