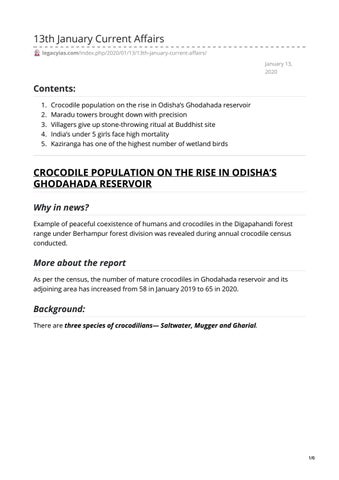 CROCODILE POPULATION ON THE RISE IN ODISHA’S GHODAHADA RESERVOIR Why in news? Example of peaceful coexistence of humans and crocodiles in the Digapahandi forest range under Berhampur forest division was revealed during annual crocodile census conducted.

More about the report As per the census, the number of mature crocodiles in Ghodahada reservoir and its adjoining area has increased from 58 in January 2019 to 65 in 2020.

Background: There are three species of crocodilians— Saltwater, Mugger and Gharial.

Mugger: The mugger crocodile, also called the Indian crocodile, or marsh crocodile, is found throughout the Indian subcontinent. It is listed as vulnerable by IUCN. The mugger is mainly a freshwater species, and found in lakes, rivers and marshes.

Gharial: The Gharial or fish eating crocodile is native to the Indian subcontinent. It is listed as a Critically Endangered by IUCN. Small released populations are present and increasing in the rivers of the National Chambal Sanctuary, Katarniaghat Wildlife Sanctuary, Son River Sanctuary and the rainforest biome of Mahanadi in Satkosia Gorge Sanctuary, Orissa. 2/6

MARADU TOWERS BROUGHT DOWN WITH PRECISION Why in news? It took around nine months and some tough talking by the Supreme Court for the State government to act against the violations and illegal encroachments.

How was buildings brought down? The use of emulsion explosives and its reduced usage at the blast sites helped in the effective demolition of the concrete buildings while containing its impact

Why was this operation done? In 2006 Maradu Panchayat granted permission for the construction for five waterfront apartments overlooking the scenic canals of Kochi backwaters. But, just nine months after granting permission, the panchayat issued a notice to the builders following a directive by the Kerala Coastal Zone Management Authority (KCZMA). The government body said the site fell under the CRZ-III vulnerable category where no construction is allowed within 200 metres from the coast. Any such act will be identified and acted upon as a violation of the Coastal Regulatory Zone (CRZ) rules. It was also revealed that a directive issued by the KCZMA makes it mandatory for self-government bodies to obtain its clearance before approving constructions in coastal areas. But Maradu panchayat didnâ&#x20AC;&#x2122;t forward any application to gain a CRZ permit for the five complexes.

What is CRZ? The CRZ norms are framed under Section 3 of the Environment Protection Act, 1986 to promote sustainable development based on scientific principles. 3/6

No construction is allowed within 200 metres from the coast in areas falling under CRZ-III zone while it is 50 metres from for CRZ-II.

VILLAGERS GIVE UP STONE-THROWING RITUAL AT BUDDHIST SITE Why in news? After a sustained campaign, heritage lovers and officials have been successful in almost stopping the stone pelting ritual at Bojjannakonda, a famous Buddhist site

More about the site â&#x20AC;&#x153;Bojjannakonda and Lingalametta are twin Buddhist monasteries dating back to the 3rd century BC. These sites have seen three forms of Buddhism â&#x20AC;&#x201D; Theravada period when Lord Buddha was considered a teacher Mahayana, where Buddhism was more devotional Vajrayana, where Buddhist tradition was more practiced as Tantra and in esoteric form

INDIA’S UNDER 5 GIRLS FACE HIGH MORTALITY Why in news? India is among the few countries in the world where, in 2018, the mortality for girls under 5 years of age exceeded that of boys, according to the ‘Levels and Trends in Child Mortality’ report by the United Nations (UN)

Findings of the report The report states that in 2018, fewer countries showed gender disparities in child mortality, and across the world, boys are expected to have a higher probability of dying before reaching age 5 than girls. But this trend was not reflected in India.

KAZIRANGA HAS ONE OF THE HIGHEST NUMBER OF WETLAND BIRDS Why in news? 5/6

Kaziranga recorded 96 species of wetland birds â&#x20AC;&#x201D; one of the highest for wildlife reserves in India, according to the second wetland bird count conducted on January 2020.

More about Bar headed goose A Bar-headed Goose has been spotted in the wetlands of Karingali Puncha in Pathanamthitta District of Kerala. In general, large flocks visit the Koonthankulam bird sanctuary at Tirunelveli in Tamil Nadu. It is very rare that the bird is spotted in Kerala. The wetlands of Karingali Puncha is a major birding spot in the district. It reported the highest bird count in the Asian Waterbird Census of 2015.

Scientific Name: Anser indicus Habitat Bar-headed geese are found in central China and Mongolia and they breed there. They start migration to the Indian sub-continent during the winter and stay till the end of the season. 6/6 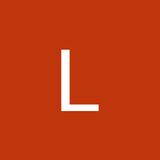 Why in news? Example of peaceful coexistence of humans and crocodiles in the Digapahandi forest range under Berhampur forest division was re...

Why in news? Example of peaceful coexistence of humans and crocodiles in the Digapahandi forest range under Berhampur forest division was re...