Left of the Lake Magazine Issue 12 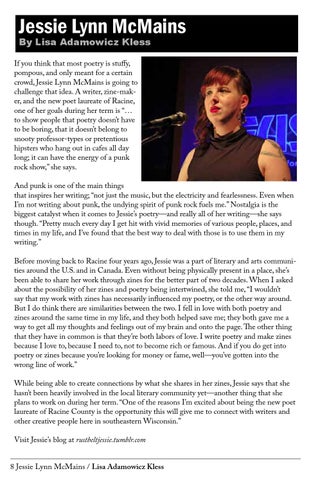 If you think that most poetry is stuffy, pompous, and only meant for a certain crowd, Jessie Lynn McMains is going to challenge that idea. A writer, zine-maker, and the new poet laureate of Racine, one of her goals during her term is “… to show people that poetry doesn’t have to be boring, that it doesn’t belong to snooty professor-types or pretentious hipsters who hang out in cafes all day long; it can have the energy of a punk rock show,” she says. And punk is one of the main things that inspires her writing; “not just the music, but the electricity and fearlessness. Even when I’m not writing about punk, the undying spirit of punk rock fuels me.” Nostalgia is the biggest catalyst when it comes to Jessie’s poetry—and really all of her writing—she says though. “Pretty much every day I get hit with vivid memories of various people, places, and times in my life, and I’ve found that the best way to deal with those is to use them in my writing.” Before moving back to Racine four years ago, Jessie was a part of literary and arts communities around the U.S. and in Canada. Even without being physically present in a place, she’s been able to share her work through zines for the better part of two decades. When I asked about the possibility of her zines and poetry being intertwined, she told me, “I wouldn’t say that my work with zines has necessarily influenced my poetry, or the other way around. But I do think there are similarities between the two. I fell in love with both poetry and zines around the same time in my life, and they both helped save me; they both gave me a way to get all my thoughts and feelings out of my brain and onto the page. The other thing that they have in common is that they’re both labors of love. I write poetry and make zines because I love to, because I need to, not to become rich or famous. And if you do get into poetry or zines because you’re looking for money or fame, well—you’ve gotten into the wrong line of work.” While being able to create connections by what she shares in her zines, Jessie says that she hasn’t been heavily involved in the local literary community yet—another thing that she plans to work on during her term. “One of the reasons I’m excited about being the new poet laureate of Racine County is the opportunity this will give me to connect with writers and other creative people here in southeastern Wisconsin.” Visit Jessie’s blog at rustbeltjessie.tumblr.com 8 Jessie Lynn McMains / Lisa Adamowicz Kless

Left of the Lake Magazine Issue 12

For its first issue of 2016, Left of the Lake Magazine takes a look at zines, those creative, curious, small-run, self-published booklets and the Kenosha/Racine area zine scene. Issue 12 also profiles the 2015-17 Poets Laureate of Kenosha and Racine, and welcomes readers to Northern Lights Gallery in downtown Racine, WI. 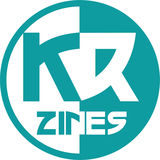