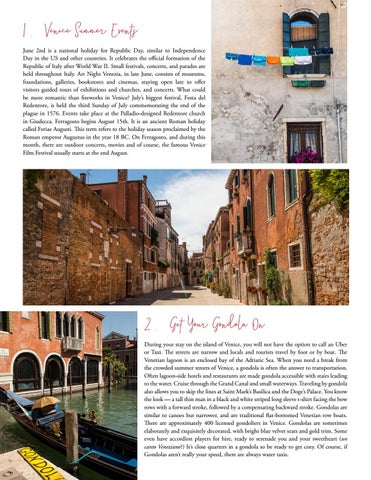 June 2nd is a national holiday for Republic Day, similar to Independence Day in the US and other countries. It celebrates the official formation of the Republic of Italy after World War II. Small festivals, concerts, and parades are held throughout Italy. Art Night Venezia, in late June, consists of museums, foundations, galleries, bookstores and cinemas, staying open late to offer visitors guided tours of exhibitions and churches, and concerts. What could be more romantic than fireworks in Venice? July’s biggest festival, Festa del Redentore, is held the third Sunday of July commemorating the end of the plague in 1576. Events take place at the Palladio-designed Redentore church in Giudecca. Ferragosto begins August 15th. It is an ancient Roman holiday called Feriae Augusti. This term refers to the holiday season proclaimed by the Roman emperor Augustus in the year 18 BC. On Ferragosto, and during this month, there are outdoor concerts, movies and of course, the famous Venice Film Festival usually starts at the end August.

2. Get Your Gondola On

During your stay on the island of Venice, you will not have the option to call an Uber or Taxi. The streets are narrow and locals and tourists travel by foot or by boat. The Venetian lagoon is an enclosed bay of the Adriatic Sea. When you need a break from the crowded summer streets of Venice, a gondola is often the answer to transportation. Often lagoon-side hotels and restaurants are made gondola accessible with stairs leading to the water. Cruise through the Grand Canal and small waterways. Traveling by gondola also allows you to skip the lines at Saint Mark’s Basilica and the Doge’s Palace. You know the look — a tall thin man in a black and white striped long sleeve t-shirt facing the bow rows with a forward stroke, followed by a compensating backward stroke. Gondolas are similar to canoes but narrower, and are traditional flat-bottomed Venetian row boats. There are approximately 400 licensed gondoliers in Venice. Gondolas are sometimes elaborately and exquisitely decorated, with bright blue velvet seats and gold trim. Some even have accordion players for hire, ready to serenade you and your sweetheart (un canto Veneziano?) It’s close quarters in a gondola so be ready to get cozy. Of course, if Gondolas aren’t really your speed, there are always water taxis. 5 0 | L E FA I R MAG AZI NE