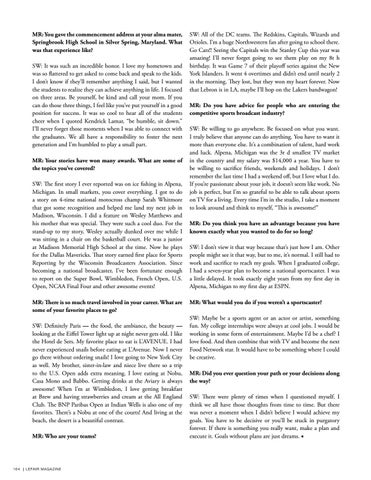 MR: You gave the commencement address at your alma mater, Springbrook High School in Silver Spring, Maryland. What was that experience like? SW: It was such an incredible honor. I love my hometown and was so flattered to get asked to come back and speak to the kids. I don’t know if they’ll remember anything I said, but I wanted the students to realize they can achieve anything in life. I focused on three areas. Be yourself, be kind and call your mom. If you can do those three things, I feel like you’ve put yourself in a good position for success. It was so cool to hear all of the students cheer when I quoted Kendrick Lamar, “be humble, sit down.” I’ll never forget those moments when I was able to connect with the graduates. We all have a responsibility to foster the next generation and I’m humbled to play a small part. MR: Your stories have won many awards. What are some of the topics you’ve covered? SW: The first story I ever reported was on ice fishing in Alpena, Michigan. In small markets, you cover everything. I got to do a story on 4-time national motocross champ Sarah Whitmore that got some recognition and helped me land my next job in Madison, Wisconsin. I did a feature on Wesley Matthews and his mother that was special. They were such a cool duo. For the stand-up to my story, Wesley actually dunked over me while I was sitting in a chair on the basketball court. He was a junior at Madison Memorial High School at the time. Now he plays for the Dallas Mavericks. That story earned first place for Sports Reporting by the Wisconsin Broadcasters Association. Since becoming a national broadcaster, I’ve been fortunate enough to report on the Super Bowl, Wimbledon, French Open, U.S. Open, NCAA Final Four and other awesome events! MR: There is so much travel involved in your career. What are some of your favorite places to go? SW: Definitely Paris — the food, the ambiance, the beauty — looking at the Eiffel Tower light up at night never gets old. I like the Hotel de Sers. My favorite place to eat is L’AVENUE. I had never experienced snails before eating at L’Avenue. Now I never go there without ordering snails! I love going to New York City as well. My brother, sister-in-law and niece live there so a trip to the U.S. Open adds extra meaning. I love eating at Nobu, Casa Mono and Babbo. Getting drinks at the Aviary is always awesome! When I’m at Wimbledon, I love getting breakfast at Brew and having strawberries and cream at the All England Club. The BNP Paribas Open at Indian Wells is also one of my favorites. There’s a Nobu at one of the courts! And living at the beach, the desert is a beautiful contrast. MR: Who are your teams?

SW: All of the DC teams. The Redskins, Capitals, Wizards and Orioles. I’m a huge Northwestern fan after going to school there. Go Cats!! Seeing the Capitals win the Stanley Cup this year was amazing! I’ll never forget going to see them play on my 8t h birthday. It was Game 7 of their playoff series against the New York Islanders. It went 4 overtimes and didn’t end until nearly 2 in the morning. They lost, but they won my heart forever. Now that Lebron is in LA, maybe I’ll hop on the Lakers bandwagon! MR: Do you have advice for people who are entering the competitive sports broadcast industry? SW: Be willing to go anywhere. Be focused on what you want. I truly believe that anyone can do anything. You have to want it more than everyone else. It’s a combination of talent, hard work and luck. Alpena, Michigan was the 3r d smallest TV market in the country and my salary was $14,000 a year. You have to be willing to sacrifice friends, weekends and holidays. I don’t remember the last time I had a weekend off, but I love what I do. If you’re passionate about your job, it doesn’t seem like work. No job is perfect, but I’m so grateful to be able to talk about sports on TV for a living. Every time I’m in the studio, I take a moment to look around and think to myself, “This is awesome!” MR: Do you think you have an advantage because you have known exactly what you wanted to do for so long? SW: I don’t view it that way because that’s just how I am. Other people might see it that way, but to me, it’s normal. I still had to work and sacrifice to reach my goals. When I graduated college, I had a seven-year plan to become a national sportscaster. I was a little delayed. It took exactly eight years from my first day in Alpena, Michigan to my first day at ESPN. MR: What would you do if you weren’t a sportscaster? SW: Maybe be a sports agent or an actor or artist, something fun. My college internships were always at cool jobs. I would be working in some form of entertainment. Maybe I’d be a chef? I love food. And then combine that with TV and become the next Food Network star. It would have to be something where I could be creative. MR: Did you ever question your path or your decisions along the way? SW: There were plenty of times when I questioned myself. I think we all have those thoughts from time to time. But there was never a moment when I didn’t believe I would achieve my goals. You have to be decisive or you’ll be stuck in purgatory forever. If there is something you really want, make a plan and execute it. Goals without plans are just dreams. ■