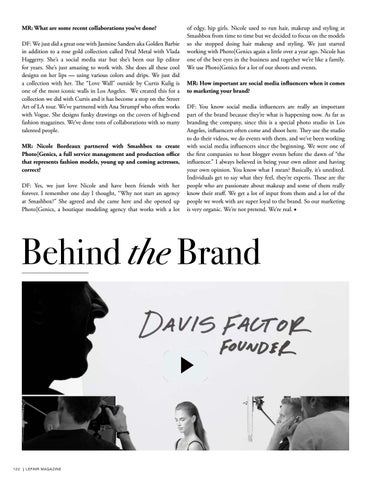 MR: What are some recent collaborations you’ve done? DF: We just did a great one with Jasmine Sanders aka Golden Barbie in addition to a rose gold collection called Petal Metal with Vlada Haggerty. She’s a social media star but she’s been our lip editor for years. She’s just amazing to work with. She does all these cool designs on her lips — using various colors and drips. We just did a collection with her. The “Love Wall” outside by Curtis Kulig is one of the most iconic walls in Los Angeles. We created this for a collection we did with Curtis and it has become a stop on the Street Art of LA tour. We’ve partnered with Ana Strumpf who often works with Vogue. She designs funky drawings on the covers of high-end fashion magazines. We’ve done tons of collaborations with so many talented people. MR: Nicole Bordeaux partnered with Smashbox to create Photo[Genics, a full service management and production office that represents fashion models, young up and coming actresses, correct? DF: Yes, we just love Nicole and have been friends with her forever. I remember one day I thought, “Why not start an agency at Smashbox?” She agreed and she came here and she opened up Photo[Genics, a boutique modeling agency that works with a lot

of edgy, hip girls. Nicole used to run hair, makeup and styling at Smashbox from time to time but we decided to focus on the models so she stopped doing hair makeup and styling. We just started working with Photo[Genics again a little over a year ago. Nicole has one of the best eyes in the business and together we’re like a family. We use Photo]Genics for a lot of our shoots and events. MR: How important are social media influencers when it comes to marketing your brand? DF: You know social media influencers are really an important part of the brand because they’re what is happening now. As far as branding the company, since this is a special photo studio in Los Angeles, influencers often come and shoot here. They use the studio to do their videos, we do events with them, and we’ve been working with social media influencers since the beginning. We were one of the first companies to host blogger events before the dawn of “the influencer.” I always believed in being your own editor and having your own opinion. You know what I mean? Basically, it’s unedited. Individuals get to say what they feel, they’re experts. These are the people who are passionate about makeup and some of them really know their stuff. We get a lot of input from them and a lot of the people we work with are super loyal to the brand. So our marketing is very organic. We’re not pretend. We’re real. ■