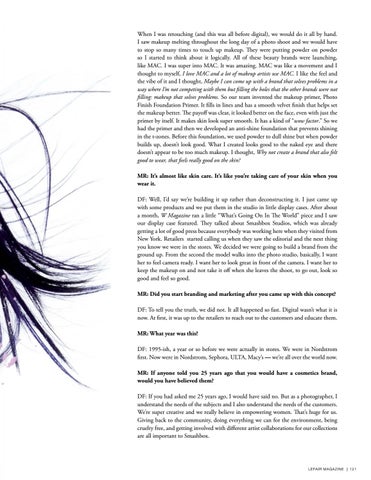 When I was retouching (and this was all before digital), we would do it all by hand. I saw makeup melting throughout the long day of a photo shoot and we would have to stop so many times to touch up makeup. They were putting powder on powder so I started to think about it logically. All of these beauty brands were launching, like MAC. I was super into MAC. It was amazing. MAC was like a movement and I thought to myself, I love MAC and a lot of makeup artists use MAC. I like the feel and the vibe of it and I thought, Maybe I can come up with a brand that solves problems in a way where I’m not competing with them but filling the holes that the other brands were not filling: makeup that solves problems. So our team invented the makeup primer, Photo Finish Foundation Primer. It fills in lines and has a smooth velvet finish that helps set the makeup better. The payoff was clear, it looked better on the face, even with just the primer by itself. It makes skin look super smooth. It has a kind of “wow factor.” So we had the primer and then we developed an anti-shine foundation that prevents shining in the t-zones. Before this foundation, we used powder to dull shine but when powder builds up, doesn’t look good. What I created looks good to the naked eye and there doesn’t appear to be too much makeup. I thought, Why not create a brand that also felt good to wear, that feels really good on the skin? MR: It’s almost like skin care. It’s like you’re taking care of your skin when you wear it. DF: Well, I’d say we’re building it up rather than deconstructing it. I just came up with some products and we put them in the studio in little display cases. After about a month, W Magazine ran a little “What’s Going On In The World” piece and I saw our display case featured. They talked about Smashbox Studios, which was already getting a lot of good press because everybody was working here when they visited from New York. Retailers started calling us when they saw the editorial and the next thing you know we were in the stores. We decided we were going to build a brand from the ground up. From the second the model walks into the photo studio, basically, I want her to feel camera ready. I want her to look great in front of the camera. I want her to keep the makeup on and not take it off when she leaves the shoot, to go out, look so good and feel so good. MR: Did you start branding and marketing after you came up with this concept? DF: To tell you the truth, we did not. It all happened so fast. Digital wasn’t what it is now. At first, it was up to the retailers to reach out to the customers and educate them. MR: What year was this? DF: 1995-ish, a year or so before we were actually in stores. We were in Nordstrom first. Now were in Nordstrom, Sephora, ULTA, Macy’s — we’re all over the world now. MR: If anyone told you 25 years ago that you would have a cosmetics brand, would you have believed them? DF: If you had asked me 25 years ago, I would have said no. But as a photographer, I understand the needs of the subjects and I also understand the needs of the customers. We’re super creative and we really believe in empowering women. That’s huge for us. Giving back to the community, doing everything we can for the environment, being cruelty free, and getting involved with different artist collaborations for our collections are all important to Smashbox.