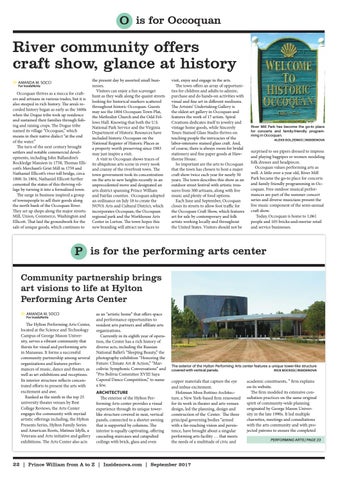 O is for Occoquan

Occoquan thrives as a mecca for crafters and artisans in various trades, but it is also steeped in rich history. The area’s recorded history began as early as the 1600s when the Dogue tribe took up residence and sustained their families through fishing and raising crops. The Dogue tribe named its village “Occoquan,” which means in their native dialect “at the end of the water.” The turn of the next century brought settlers and notable commercial developments, including John Ballandine’s Rockledge Mansion in 1758, Thomas Ellicott’s Merchant’s Grist Mill in 1759 and Nathaniel Ellicott’s river toll bridge, circa 1800. In 1804, Nathaniel Ellicott further cemented the status of this thriving village by turning it into a formalized town. The surge in business inspired a group of townspeople to sell their goods along the north bank of the Occoquan River. They set up shops along the major streets: Mill, Union, Commerce, Washington and Ellicott. That laid the groundwork for the sale of unique goods, which continues to

the present day by assorted small businesses. Visitors can enjoy a fun scavenger hunt as they walk along the quaint streets looking for historical markers scattered throughout historic Occoquan. Guests may see the 1804 Occoquan Town Plat, the Methodist Church and the Odd Fellows Hall. Knowing that both the U.S. National Park Service and the Virginia Department of Historic Resources have included historic Occoquan on the National Register of Historic Places as a property worth preserving since 1983 may just inspire a visit. A visit to Occoquan shows traces of its ubiquitous arts scene in every nook and cranny of the riverfront town. The town government took its concentration on the arts to new heights recently in an unprecedented move and designated an arts district spanning Prince William and Fairfax counties. Occoquan adopted an ordinance on July 18 to create the NOVA Arts and Cultural District, which incorporates Occoquan, the Occoquan regional park and the Workhouse Arts Center in Lorton. The town hopes this new branding will attract new faces to

visit, enjoy and engage in the arts. The town offers an array of opportunities for children and adults to admire, purchase and do hands-on activities with visual and fine art in different mediums. The Artsists’ Undertaking Gallery is the oldest art gallery in Occoquan and features the work of 17 artists. Spiral Creations dedicates itself to jewelry and vintage home goods, while Sincerely Yours Stained Glass Studio thrives on teaching people the intricacies of the labor-intensive stained glass craft. And, of course, there is always room for bridal stationery and fine paper goods at Hawthorne House. So important are the arts to Occoquan that the town has chosen to host a major craft show twice each year for nearly 50 years. The town describes this show as an outdoor street festival with artistic treasures from 300 artisans, along with live music and plenty of food options. Each June and September, Occoquan closes its streets to allow foot traffic for the Occoquan Craft Show, which features art for sale by contemporary and folk artists working locally and throughout the United States. Visitors should not be

surprised to see pipers dressed to impress and playing bagpipes or women modeling folk dresses and headpieces. Occoquan values performing arts as well. A little over a year old, River Mill Park became the go-to place for concerts and family friendly programming in Occoquan. Free outdoor musical performances are part of the summer concert series and diverse musicians present the live music component of the semi-annual craft show. Today, Occoquan is home to 1,061 people and 105 bricks-and-mortar retail and service businesses.

The Hylton Performing Arts Center, located at the Science and Technology Campus of George Mason University, serves a vibrant community that thirsts for visual and performing arts in Manassas. It forms a successful community partnership among several organizations and features performances of music, dance and theater, as well as art exhibitions and receptions. Its interior structure reflects concentrated efforts to present the arts with excitement and awe. Ranked as the ninth in the top 25 university theater venues by Best College Reviews, the Arts Center engages the community with myriad artistic offerings including, the Hylton Presents Series, Hylton Family Series and American Roots, Matinee Idylls, a Veterans and Arts initiative and gallery exhibitions. The Arts Center also acts

as an “artistic home” that offers space and performance opportunities to resident arts partners and affiliate arts organizations. Currently in its eighth year of operation, the Center has a rich history of diverse acts, including the Russian National Ballet’s “Sleeping Beauty,” the photography exhibition “Honoring the Future: Climate Art & Action,” “Marcolivia: Symphonic Conversations” and “Pro Bolivia Committee XVIII Saya Caporal Dance Competition,” to name a few. ARCHITECTURE The exterior of the Hylton Performing Arts center provides a visual experience through its unique towerlike structure covered in neat, vertical panels, connected to a shorter awning that is supported by columns. The interior is equally captivating, offering cascading staircases and catapulted ceilings with brick, glass and even

copper materials that capture the eye and imbue excitement. Holzman Moss Bottino Architecture, a New York-based firm renowned for its work in theater and arts venues design, led the planning, design and construction of the Center. The three principal governing bodies “armed with a far-reaching vision and persistence, have brought about a singular performing arts facility … that meets the needs of a multitude of civic and

academic constituents, ” firm explains on its website. The firm modeled its extensive consultation practices on the same original spirit of community-wide planning originated by George Mason University in the late 1990s. It led multiple charrettes, meetings and consultations with the arts community and with projected patrons to ensure the completed PERFORMING ARTS | PAGE 23