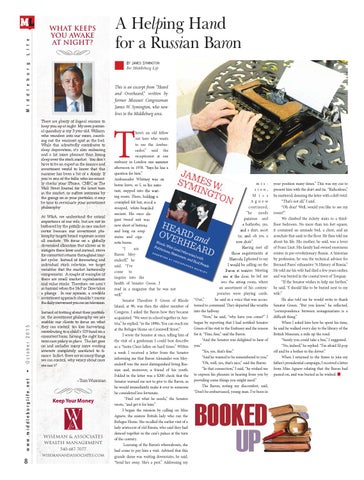 THE PURSUIT WHAT KEEPS YOU AWAKE OF ALPHA AT NIGHT?

By James Symington For Middleburg Life

The term “alpha” has a lengthy Investopedia definition. In short, There are isplenty of logical reasons to “alpha” the excess return over keep you up at night. My own personan investment’s benchmark index al quandary is my 3-year old, William, return. Investors aim for “alpha”. who wanders into our room, searchTherefore, almost all investment ing out the warmest spot in the bed. advisors that theycontributes get paid to to While thisfeel admittedly chase “alpha”. sleep deprivation, it’s also endearing

and a lot more pleasant than losing Few investors have the necessary sleep over the stock market. You don’t combination of ability, time, capital have to be an expert in the finance and and controlworld overto an investment investment know that this to create “alpha”. Regardless summer has been a bit of a doozy. of If experience, most have you’re one of the folksinvestors who incessantly checks your CNBC to or live The these goals in IPhone, mind: ability Walltheir Street Journal for the latest turn on portfolio’s income, saving in the market,education or suffersor insomnia by for a child’s their own the goings onand in your portfolio, may retirement making sureittheir be time to reevaluate your investment investments are first-rate. philosophy.

Most investors share the challenge At capturing W&A, we understand the of critical of the “return” the importance of our role, but are not so capital markets, as opposed to bothered by the pitfalls in one market generating their own “alpha.” sector because our investment phiProblem is, most never losophy targets broadinvestors exposure across capture the market’s entire return. all markets. We focus on a globally They don’tallocation get the investment’s diversified that allows usfull to return, the and investor’s return. mitigaterather these lows instead, strive for consistent returns throughout marWhat’s the difference? ket cycles. Instead of forecasting and

Carl Richards, a writer quoted in the individual stock selection, we target financial rags, calls this difference variables that the market historically “the behaviorAgap.” compensates. coupleUnfortunately, of examples of these are small capitalization emotions canmarket prohibit sound and value stocks. Therefore, we aren’t investment decisions and investors in turmoil when the S&P Dow takes buy and sell when theyorshouldn’t.

a plunge. In our opinion, a credible investment approach shouldn’t mirror the daily movement you see on television.

A Helping Hand for a Russian Baron

Instead of fretting about their portfolios, the investment philosophy we use enables our clients to focus on what they can control: tax loss harvesting, For years to I’ve been 529 advocating contributing a child’s fund on a that investors trying to catch consistent basis,stop having the right long “alpha”. I encourage to term care policy in place. investors The list goes on andinincludes many exciting settle and rely on more an empirical interests completely unrelated to fiapproach, not based on speculation, nance. fact, irrefutable there are so many things but onIn the science of we can control, why worry aboutin onesa capital markets. Investing we can’t?

This is an excerpt from “Heard and Overheard,” written by former Missouri Congressman James W. Symington, who now lives in the Middleburg area.

here’s an old fellow out here who wants to see the Ambassador,” said the receptionist at our embassy in London one summer afternoon in 1958. “Says he has a question for him.” Ambassador Whitney was on home leave, so I, as his assistant, stepped into the waiting room. There, holding a crumpled felt hat, stood a stooped, white-bearded ancient. His once elegant tweed suit was now short of buttons and long on soup stains and cigarette burns. “I am Baron Meyendorff,” he said. “I’ve come to inquire into the health of Senator Green. I read in a magazine that he was not well.” Senator Theodore F. Green of Rhode Island, at 90, was then the oldest member of Congress. I asked the Baron how they became acquainted. “We were in school together in Austria,” he replied, “in the 1890s. You can reach me at the Refugee Home on Cromwell Street.” I wrote the Senator at once, telling him of the visit of a gentleman I could best describe as a “Santa Claus fallen on hard times.” Within a week I received a letter from the Senator informing me that Baron Alexander von Meyendorff was the most distinguished living Russian and, moreover, a friend of his youth. Folded in the letter was a $200 check that the Senator warned me not to give to the Baron, as he would immediately make it over to someone he considered less fortunate. “Find out what he needs,” the Senator wrote, “and get it for him.” I began the mission by calling on Miss Agnew, the austere British lady who ran the Refugee Home. She recalled the earlier visit of a lady aristocrat of old Russia, who said they had danced together in the czar’s palace at the turn of the century. Learning of the Baron’s whereabouts, she had come to pay him a visit. Advised that this grande dame was waiting downstairs, he said, “Send her away. She’s a pest.” Addressing my

mission, M i s s Agnew continued, “he needs pajamas and a bathrobe, yes, and a shirt, ascot tie, and, oh yes, a new chair.” Having met all those requirements at Harrods, I phoned to say I would be calling on the Baron at teatime. Meeting me at the door, he led me into the sitting room, where an assortment of his contemporaries were playing cards. “Out,” he said in a voice that was accustomed to command. They departed like wraiths into the hallway. “Now,” he said, “why have you come?” I began by reporting that I had notiﬁed Senator Green of his visit to the Embassy and the reason for it. “Fine, ﬁne,” said the Baron. “And the Senator was delighted to hear of you.” “Yes, yes, that’s ﬁne.” “And he wanted to be remembered to you.” “Oh, well, yes, that’s nice,” said the Baron. “In that connection,” I said, “he wished me to express his pleasure in hearing from you by providing some things you might need.” The Baron, noting my discomfort, said, “Don’t be embarrassed, young man. I’ve been in

your position many times.” This was my cue to present him with the shirt and tie. “Ridiculous,” he muttered, donning the latter with a deft twirl. “That’s not all,” I said. “Oh dear! Well, would you like to see my room?” We climbed the rickety stairs to a thirdﬂoor bedroom. No more than ten feet square, it contained an unmade bed, a chest, and an armchair that sank to the ﬂoor. He then told me about his life. His mother, he said, was a lover of Franz Liszt. His family had owned enormous estates in pre-revolutionary Russia. A historian by profession, he was the technical advisor for Bernard Pares’ exhaustive “A History of Russia.” He told me his wife had died a few years earlier, and was buried in the coastal town of Torquay. “If the Senator wishes to help me further,” he said, “I should like to be buried next to my wife.” He also told me he would write to thank Senator Green. “But you know,” he reﬂected, “correspondence between nonagenarians is a difficult thing.” When I asked him how he spent his time, he said he walked every day to the library of the British Museum, a mile up the road. “Surely you could take a bus,” I suggested. “No, indeed,” he replied. “I’m afraid I’d pop off and be a bother to the driver.” When I returned to the States to join my father’s presidential campaign, I received a letter from Miss Agnew relating that the Baron had passed on, and was buried as he wished. n