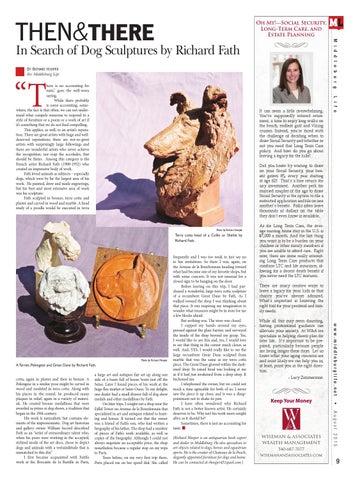 here is no accounting for taste,” goes the well-worn saying. While there probably is some accounting, somewhere, the fact is that often, we can not understand what compels someone to respond to a style of furniture or a poem or a work of art if it’s something that we do not find compelling. This applies, as well, to an artist’s reputation. There are great artists with huge and welldeserved reputations; there are not-so-great artists with surprisingly large followings and there are wonderful artists who never achieve the recognition, nor reap the accolades, that should be theirs. Among this category is the French artist Richard Fath (1900-1952) who created an impressive body of work. Fath loved animals as subjects – especially dogs, which were by far the largest area of his work. He painted, drew and made engravings, but his best and most extensive area of work was his sculpture. Fath sculpted in bronze, terra cotta and plaster and carved in wood and marble. A head study of a poodle would be executed in terra

It canterm seem“alpha” a little overwhelming. The has a lengthy You’ve supposedly entered Investopedia definition. In retireshort, ment, a time to enjoy walks on “alpha” is the excesslong return over the beach, endless golf and Viking an investment’s benchmark index cruises. Investors Instead, you’re faced with return. aim for “alpha”. the challenge of deciding when to Therefore, almost all investment draw Social Security and whether or advisors feel that they get paid to not you need that Long Term Care chase “alpha”. policy. And how do you go about

leaving a legacyhave for the kids? Few investors the necessary combination of ability, time, capital Did you knowover by waiting to draw and control an investment on create your Social Security, your bento “alpha”. Regardless of efit grows 8% every year starting experience, most investors have at age 62? That’s a fine return for these goals in mind: ability to live any investment. Another perk for on their portfolio’s income, saving married couples of the age to draw for a child’s education or their own Social Security is the option to file a retirement and making sure their restricted application and file on one investments are first-rate. another’s benefit. Folks often leave

Terra cotta head of a Collie or Sheltie by Richard Fath.

(Richard Hooper is an antiquarian book expert and dealer in Middleburg. He also specializes in art objects related to dogs, horses and equestrian sports. He is the creator of Chateaux de la Pooch, elegantly appointed furniture for dogs and home. He can be contacted at rhooper451@aol.com.)

While all this may seem daunting, having professional guidance can For years I’ve been At advocating alleviate your anxiety. W&A we that investors stop trying catch specialize in helping clients to plan for “alpha”. encourage investors to later life. IIt’s important to be prepared,inparticularly because people settle and rely on an empirical are living longer these Let us approach, not based ondays. speculation, knowonwhat aging concerns but the your irrefutable scienceare of and mostmarkets. likely we Investing can help you capital in or,a at least, point you in the globally diversified, taxright anddireccost tion. efficient portfolio will prevail. - Lucy Zimmerman

a large art and antiques fair set up along one side of a basin full of house boats just off the Seine. Later I found pieces of his work at the huge flea market at Saint-Ouen. To my delight, one dealer had a small drawer full of dog show medals and other medallions by Fath. On later trips, I sought out a shop near the Eiffel Tower on Avenue de la Bourdonnais that specialized in art and antiques related to hunting and horses. It turned out that the owner was a friend of Fath’s son, who had written a biography of his father. The shop had a number of pieces of Fath’s work available, as well as copies of the biography. Although I could not always negotiate an acceptable price, the shop nonetheless became a regular stop on my trips to Paris. Years before, on my very first trip there, Paris placed me on her speed dial. She called

cotta, again in plaster and then in bronze. A Pekingese in a similar pose might be carved in wood and modeled in terra cotta. Along with his pieces in the round, he produced many plaques in relief, again in a variety of materials. He created bronze medallions that were awarded as prizes at dog shows, a tradition that began in the 19th century. His work is naturalistic but contains elements of the impressionistic. Dog art historian and gallery owner William Secord described Fath as an “artist of extraordinary talent who, when his peers were working in the accepted, stylized mode of the art deco, chose to depict dogs and animals with a verisimilitude that is unmatched to this day.” I first became acquainted with Faith’s work at the Brocante de la Bastille in Paris,

Carl Richards, a writer quoted in the combine LTC and life insurance, alfinancial rags, calls this difference lowing for a decent death benefit if “the behavior Unfortunately, you never needgap.” the LTC features. emotions can prohibit sound investment decisions and investors There are many creative ways to buy and sell when they shouldn’t. leave a legacy for your kids or that

A Terrier, Pekingese and Great Dane by Richard Fath.

frequently and I was too weak to just say no to her invitations. So there I was, again, on the Avenue de la Bourbonnais heading toward what had become one of my favorite shops, but with some concern. It was not unusual for a closed sign to be hanging on the door. Before leaving on this trip, I had purchased a wonderful, large terra cotta sculpture of a recumbent Great Dane by Fath. As I walked toward the shop I was thinking about that piece. It was inspiring my imagination to wonder what treasures might be in store for me a few blocks ahead. But nothing was. The store was closed. I cupped my hands around my eyes, pressed against the glass barrier, and surveyed the inside of the shop beyond my grasp. Yes, I would like to see this and, yes, I would love to see that thing in the corner much closer, as well. And, YES, I would really like to see the large recumbent Great Dane sculpted from marble that was the same as my terra cotta piece. The Great Dane glowed within the darkened shop. Its raised head was looking at me as if it had just awakened from a deep sleep. It beckoned me. I telephoned the owner, but we could not reach a time agreeable for both of us. I never saw the piece it up close, and it was a disappointment not to shake its paw. I have often wondered why Richard Fath is not a better known artist. He certainly deserves to be. Why isn’t his work more sought after, as it should be? Sometimes, there is just no accounting for taste. n

thousands of dollars on challenge the table Most investors share the they don’t even know is available. of capturing the “return” of the capital markets, as opposed to As for Long Term Care, the avergenerating their own “alpha.” age nursing home stay in the U.S. is Problem is, most investors $7,000 a month. And the last never thing capture the market’s entire return. you want is to be a burden on your They don’t get the investment’s full children or other family members if return, investor’s you are rather unablethe to afford care.return. Right What’s the are difference? now, there some really interest-