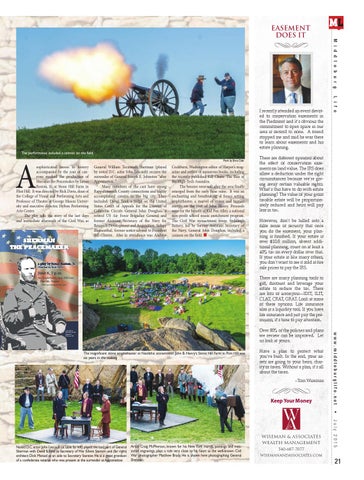 General William Tecumseh Sherman (played by noted D.C. actor John Lescault) secures the surrender of General Joseph E. Johnston “after Appomattox. ” Many members of the cast have strong Rappahannock County connections and highly accomplished careers in the big city. They included: David Tatel, a judge on the United States Court of Appeals for the District of Columbia Circuit; General John Douglass, a retired US Air Force Brigadier General and former Assistant Secretary of the Navy for Research Development and Acquisition, Sidney Blumenthal, former senior adviser to President Bill Clinton. Also in attendance was Andrew

Cockburn, Washington editor of Harper’s magazine and author of numerous books, including the recently published Kill Chain: The Rise of the High-Tech Assassins. The breezes were soft after the area finally emerged from the early June rains. It was an enchanting and breathtaking al fresco setting amphitheater, a marvel of vision and human energy on the part of John Henry. Proceeds were for the benefit of Kid Pan Alley, a national non-profit school music enrichment program. The Civil War reenactment troop, Stribling’s Battery, led by former Assistant Secretary of the Navy, General John Douglass, included a cannon on the field. n

Few haveopinions the necessary Thereinvestors are different about combination of ability, time, capital the effect of conservation easeand anThe investment mentscontrol on landover value. IRS does to create “alpha”.under Regardless of allow a deduction the right experience, most investors have circumstances because we’re givthese goalscertain in mind: ability rights. to live ing away valuable on their portfolio’s income, saving What’s this have to do with estate for a child’sThe education theirgross own planning? value oforyour retirement and making sure their taxable estate will be proportioninvestments areand first-rate. ately reduced heirs will pay less in tax. Most investors share the challenge of capturing the “return” of the However, don’t be lulled into a capital markets, as opposed to false sense of security that once generating their own “alpha.” you do the easement, your planProblem is, most investors never ning is finished. If your estate is capture the market’s entire return. over $10.8 million, absent addiThey don’t get the investment’s full tional planning, count on at least a return, the dollar investor’s return. 40% taxrather on every over that. What’s the difference? If your estate is like many others,

The magnificent stone amphitheater at Neolithic stonemason John B. Henry’s Stone Hill Farm in Flint Hill was six years in the making

For been advocating Overyears 80% ofI’ve the policies and plans that investors trying to catch we review canstop be improved. Let “alpha”. encourage investors to us look at Iyours. settle in and rely on an empirical Have a not planbased to on protect what approach, speculation, you’ve In the end,science your asbut on built. the irrefutable of sets are markets. going to your heirs, charcapital Investing in a ity or taxes. Without atax plan, it’scost all globally diversified, and about theportfolio taxes. will prevail. efficient –Tom Wiseman

Noted D.C. actor John Lescault (at table far left) played the lead part of General Sherman with David S. Tatel as Secretary of War Edwin Stanton and (far right) architect Dick Manuel as an aide to Secretary Stanton. He is a great grandson of a confederate veteran who was present at the surrender at Appomattox

you Richards, don’t want to see quoted it sold at Carl a writer infire the sale prices to pay thethis IRS.difference financial rags, calls “the behavior gap.” Unfortunately, There are many to emotions can planning prohibit tools sound gift, discount and leverage your investment decisions and investors estate reduce the shouldn’t. tax. There buy andtosell when they are lots of acronyms—IDIT, ILIT, CLAT, CRAT, GRAT. Look at some of these options. Life insurance also is a liquidity tool. If you have life insurance and just pay the premiums, it’s time to pay attention.

a play by James Reston, Jr.

I recently event devotThe term attended “alpha” an has a lengthy ed to conservation easements in Investopedia definition. In short, the Piedmont it’s obvious the “alpha” is theand excess return over commitment to open space in our an investment’s benchmark index area is second to aim none. friend return. Investors for A “alpha”. stopped mealmost and said was there Therefore, allheinvestment to learn about easements advisors feel that they get and paidhis to estate planning. chase “alpha”.

The performance included a cannon on the field

sophisticated lesson in history accompanied by the roar of canyons marked the production of Sherman the Peacemaker by James Reston, Jr. at Stone Hill Farm in Flint Hill. It was directed by Rick Davis, dean of the College of Visual and Performing Arts and Professor of Theatre at George Mason University and executive director, Hylton Performing Arts Center. The play tells the story of the last days and immediate aftermath of the Civil War, as

THE PURSUIT EASEMENT DOES IT OF ALPHA