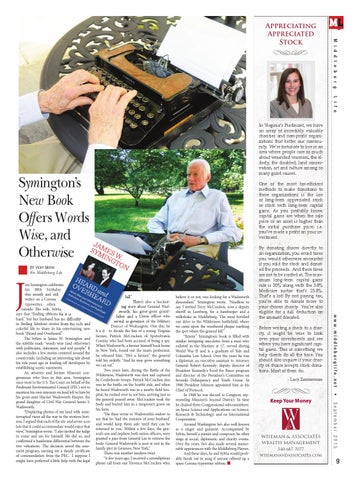 The term “alpha” has a lengthy Investopedia definition. In short, “alpha” is the excess return over In Virginia’s Piedmont, we index have an investment’s benchmark an array of incredibly valuable return. Investors aim for “alpha”. charities and non-profit organiTherefore, almost all investment zations that better our commuadvisors feel that they get paid to nity. We’re fortunate to live in an chase “alpha”.

area where people care so much

Few have the necessary aboutinvestors wounded warriors, the elcombination of ability, time,consercapital derly, the disabled, land and control over an investment vation, art and culture among so to create “alpha”. many good causes. Regardless of experience, most investors have these in mind: to live One goals of the most ability tax-efficient on their portfolio’s income, saving methods to make donations to for a child’s education or these organizations is their the own use retirement and making sure their of long-term appreciated stock investments are long-term first-rate. capital or stock with

you would otherwise encounter

By Vicky Moon For Middleburg Life

believe it or not, was looking for a Wadsworth descendant,” Symington wrote. “Needless to say, I invited Terry McCracken, now a deputy sheriff in Leesburg, for a hamburger and a milkshake in Middleburg. The meal fortified our drive to the Wilderness battlefield, where we came upon the weathered plaque marking the spot where the general fell.” “Jimmy” Symington’s book is filled with similar intriguing anecdotes from a man who enlisted in the Marines at 17, served during World War II and is a graduate of Yale and Columbia Law School. Over the years he was a diplomat, an executive assistant to Attorney General Robert Kennedy; deputy director of President Kennedy’s Food for Peace program and director of the President’s Committee on Juvenile Delinquency and Youth Crime. In 1966 President Johnson appointed him as his Chief of Protocol. In 1968 he was elected to Congress, representing Missouri’s Second District. In time he chaired three Congressional subcommittees: on Space Science and Applications; on Science, Research & Technology; and on International Cooperation. Around Washington he’s also well-known as a singer and guitarist. Accompanied by Sylvia, herself a pianist and composer, he often sings at social, diplomatic and charity events. Over the years, he’s also made several memorable appearances with the Middleburg Players. And these days, he and Sylvia would probably break out in song if anyone offered up a spare Corona typewriter ribbon. n

That’s a lot! By not paying tax, you’re able to donate more to your chosen charity. You’re also eligible for a full deduction on the amount donated.

Before writing checkadvocating to a charFor years I’ve abeen ity, it might be wise look that investors stop trying to to catch over your investments and “alpha”. I encourage investorssee to whereinyou capisettle andhave rely significant on an empirical tal gains. not This is something we approach, based on speculation, help clients do all the time. You but on the irrefutable science of should also inquire if your charcapital markets. Investing in a ity of choice accepts stock donaglobally diversified, tax and cost tions. Most of them efficient portfolio willdo. prevail. - Lucy Zimmerman –Tom Wiseman

fascinatThere’s also a fascinat Wading story about General Wad grandsworth, his great-great grand father and a Union officer who served as governor of the Military District of Washington. One day, he h a d to decide the fate of a young Virginia farmer, Patrick McCracken of Spotsylvania County, who had been accused of being a spy. When Wadsworth, a farmer himself back home in New York, found out the man’s profession, he released him. “He’s a farmer,” the general told his orderly. “And he may grow something we can eat.” Two years later, during the Battle of the Wilderness, Wadsworth was shot and captured by Confederate troops. Patrick McCracken also was in the battle, on the South’s side, and when he heard Wadsworth was in a nearby field hospital, he rushed over to see him, arriving just as the general passed away. McCracken took the body and buried him in a temporary grave on his farm. “He then wrote to Wadsworth’s widow to say that he ‘had the remains of your husband’ and would keep them safe ‘until they can be returned to you.’ Within a few days, the general’s son and nephew, both union officers, were granted a pass from General Lee to retrieve the body. General Wadsworth is now at rest in the family plot in Geneseo, New York.” There was another modern twist. “A few years ago, I received a serendipitous phone call from one Terrence McCracken who,

im Symington celebrates his 88th birthday this month and still writes on a Corona typewriter, often outside. His wife, Sylvia, says that “finding ribbons for it is hard,” but her husband has no difficulty in finding fabulous stories from his rich and colorful life to share in his entertaining new book “Heard and Overheard.” The byline is James W. Symington and the subtitle reads “words wise (and otherwise) with politicians, statesmen, and real people.” It also includes a few stories centered around the countryside, including an interesting tale about his role years ago in fending off developers by establishing scenic easements. An attorney and former Missouri congressman who lives in this area, Symington once went to the U.S. Tax Court on behalf of the Piedmont Environmental Council (PEC) not to mention his own interests on land left to him by his great-aunt Harriet Wadsworth Harper, the grand daughter of Civil War General James S. Wadsworth. “Displaying photos of my land with uninterrupted views all the way to the western horizon, I argued that each of the six- and seven-acre lots that it could accommodate would enjoy that view,” Symington wrote. “I also invited the judge to come and see for himself. He did so, and confirmed a handsome differential between the two valuations. The decision saved the easement program, earning me a dandy certificate of commendation from the PEC. I suppose I might have preferred a little help with the legal

Carl Richards, a writer in the if you sold the stockquoted and donatfinancial rags, calls this difference ed the proceeds. And these taxes “the behavior gap.” Unfortunately, are not to be scoffed at. The maxemotions can imum long-termprohibit capital sound gains investment and the investors rate is 20%decisions along with 3.8% buy and sellsurtax when they shouldn’t. Medicare that’s 23.8%.

gains.investors As youshare probably know, Most the challenge capital gains are when the of capturing the “return” of sale the price ofmarkets, an asset as is higher than capital opposed to the initial purchase i.e. generating their ownprice; “alpha.” you’ve made a profit on your inProblem is, most investors never vestment. capture the market’s entire return. They don’t get the investment’s full By donating shares directly to return, rather the investor’s return. an organization, you avoid taxes What’s the difference?