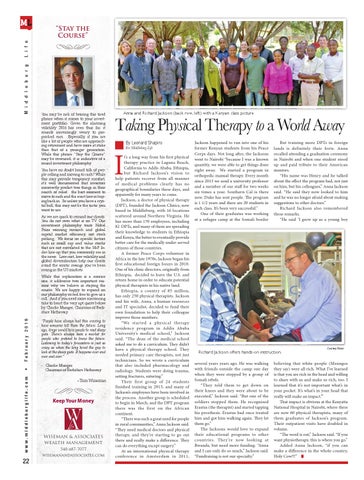 THE PURSUIT “Stay the Course” OF ALPHA

The term “alpha” has a lengthy You may be sick of hearing this tired Investopedia definition. In short, phrase when it comes to your invest“alpha” is the excess the return over ment portfolio. Given alarming an investment’s volatility 2016 hasbenchmark seen thus index far, it sounds increasingly weary to pinreturn. Investors aim for “alpha”. pricked ears.almost Especially, if you are Therefore, all investment like a lot of people who are approachadvisors feel that they get paid to ing retirement and have more at stake chase “alpha”. than that of a younger generation. While this phrase “Stay the Course”

Few investors have the necessary may be overused, it is indicative of a combination of ability, time, capital sound investment philosophy. and control over an investment You have no doubt heard talk of peoto “alpha”. of ple create selling and movingRegardless to cash? While experience, most investors have this may provide temporary comfort, it’s well documented that investors these goals in mind: ability to live incorrectly predict two things in their on their portfolio’s income, saving search of relief: the best moment to for a child’s education or their own move to cash and the exact low in buyretirement and making surea their ing back in. So unless you have crysinvestments are first-rate. tal ball, this may not be the tactic you want to use.

Most investors share the challenge As we are quickthe to remind our clients: of capturing “return” of the You do not own what is on TV. Our capital markets, as opposed to investment philosophy touts Nobel generating their own “alpha.” Prize winning research and global Problem is, most investors capital market efficiency, not never stock picking. the We market’s focus on specific factors capture entire return. such as small value stocks They don’t getcap theand investment’s full that are not correlated to the S&P Inreturn, rather the investor’s return. dex line-up that you commonly see in What’s theLow difference? the news. cost, low volatility and global diversification help our clients

Carl Richards, a writer quoted in the avoid the erratic swings you’ve been financial rags, this difference seeing in the US calls markets. “the behavior gap.” Unfortunately, While this explanation is a concise emotions can two prohibit sound one, it addresses important reainvestment decisions and investors sons why we believe in staying the course. happy to shouldn’t. expand on buy andWe sellare when they

our philosophy so feel free to give us a call. And if you need more convincing take to heart the very apt quote below by Charlie Munger, Chairman of Berkshire Hathaway.

“People have always had this craving to have someone tell them the future. Long ago, kings would people advocating to read sheep For years I’vehirebeen guts. investors There’s always a market for that stopbeen trying to catch people who pretend to know the future. “alpha”. I encourage investors to Listening to today’s forecasters is just as settle and the rely onhired an empirical crazy asinwhen king the guy to approach, not based speculation, look at the sheep guts. Iton happens over and over and but on over.” the irrefutable science of

Anna and Richard Jackson (back row, left) with a Kenyan class picture

Taking Physical Therapy to a World Away

By Leonard Shapiro For Middleburg Life

t’s a long way from his first physical therapy practice in Laguna Beach, California to Addis Ababa, Ethiopia, but Richard Jackson’s vision to help patients recover from all manner of medical problems clearly has no geographical boundaries these days, and apparently for many years to come. Jackson, a doctor of physical therapy (DPT), founded the Jackson Clinics, now based in Middleburg, with 16 locations scattered around Northern Virginia. He has more than 170 employees, including 82 DPTs, and many of them are spreading their knowledge to students in Ethiopia and Kenya, the better to eventually provide better care for the medically under-served citizens of those countries. A former Peace Corps volunteer in Africa in the late 1970s, Jackson began his first educational foreign forays in 2010. One of his clinic directors, originally from Ethiopia, decided to leave the U.S. and return home in order to educate potential physical therapists in his native land. Ethiopia, a country of 85 million, has only 250 physical therapists. Jackson and his wife, Anna, a human resources and IT specialist, decided to fund their own foundation to help their colleague improve those numbers. “We started a physical therapy residency program in Addis Ababa University’s medical school,” Jackson said. “The dean of the medical school asked me to do a curriculum. They didn’t have a physical therapy school. They needed primary care therapists, not just technicians. So we wrote a curriculum that also included pharmacology and radiology. Students were doing trauma, setting fractures, suturing.” Their first group of 24 students finished training in 2013, and many of Jackson’s employees have been involved in the process. Another group is scheduled to begin in March, and the DPT program there was the first on the African continent. “There was such a great need for people in rural communities,” Anna Jackson said. “They need medical doctors and physical therapy, and they’re starting to go out there and really make a difference. They can do everything except surgery.” At an international physical therapy conference in Amsterdam in 2011,

Jackson happened to run into one of his former Kenyan students from his Peace Corps days. Not long after, the Jacksons went to Nairobi “because I was a known quantity, we were able to get things done right away. We started a program in orthopedic manual therapy. Every month since 2013 we send a university professor and a member of our staff for two weeks six times a year. Southern Cal is there now. Duke has sent people. The program is 1 1/2 years and there are 20 students in each class. It’s been very successful.” One of their graduates was working at a refugee camp at the Somali border

But training more DPTs in foreign lands is definitely their forte. Anna recalled attending a graduation ceremony in Nairobi and when one student stood up and paid tribute to their American mentors. “His name was Henry and he talked about the effect the program had, not just on him, but his colleagues,” Anna Jackson said. “He said they now looked to him and he was no longer afraid about making suggestions to other doctors.” Richard Jackson also remembered those remarks. “He said ‘I grew up as a young boy

Richard Jackson offers hands-on instruction. several years years ago. He was walking with friends outside the camp one day when they were stopped by a group of Somali rebels. “They told them to get down on their knees and they were about to be executed,” Jackson said. “But one of the soldiers stopped them. He recognized Erastus (the therapist) and started tapping his prosthesis. Erastus had once treated him and got him walking again. They let them go.” The Jacksons would love to expand their educational programs to other countries. They’re now looking at Rwanda, but need more funding. “Anna and I can only do so much,” Jackson said. “Fundraising is not our specialty.”

believing that white people (Mzungos they say) were all rich. What I’ve learned is that you are rich in the head and willing to share with us and make us rich, too. I learned that it’s not important what’s in your pocket. It’s what’s in your head that really will make an impact.’” That impact is obvious at the Kenyatta National Hospital in Nairobi, where there are now 60 physical therapists, many of them graduates of Jackson’s program. Their outpatient visits have doubled in volume. “The word is out,” Jackson said. “If you want physiotherapy, this is where you go.” Added Anna Jackson, “if you can make a difference in the whole country, Holy Cow!!!”