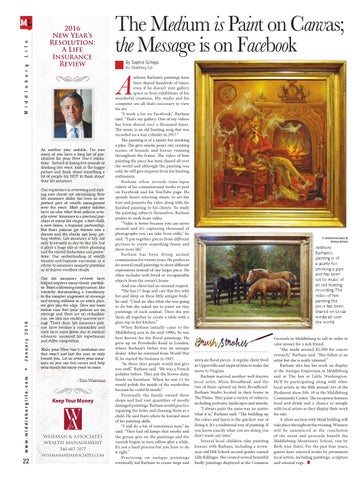 The term “alpha” has a lengthy Investopedia definition. In short, “alpha” is the excess return over an investment’s benchmark index return. Investors aim for “alpha”. Therefore, almost all investment advisors feel that they get paid to chase “alpha”. As another year unfolds, I’m sure many of you have a long list of pos-

Few investors necessary sibilities for yourhave Newthe Year’s resolucombination of ability, time, capital tions. Instead of losing five pounds or and control overlook an atinvestment drinking less wine, the bigger picture and“alpha”. think about something of a to create Regardless lot of people try NOTinvestors to think about: experience, most have their life insurance. these goals in mind: ability to live on portfolio’s income, saving Ourtheir experience in reviewing and makfor child’s education or their their own ing asure clients are maximizing life insurance dollar has been imretirement and making sureantheir portant part are of wealth management investments first-rate. over the years. Most policy holders

have no idea what theirthe policies actuMost investors share challenge ally cover. Insurance is a practical of capturing the “return” of purthe chase at many life stages: a first child, capital markets, as opposed to a new home, a business partnership. generating their getown “alpha.” But these policies thrown into a Problem is,the most investors never drawer and checks just keep getting written. insurance is key, not capture the Life market’s entire return. only to security in day-to-day life, but They don’t get the investment’s full it plays a huge role in estate planning return, rather deductions the investor’s and the related and return. protecWhat’s the understanding difference? of wealth tions. Our transfer and business succession as it

to the complex alignment of coverage and saving millions in an estate plan, we give you the edge. Once our team makes sure that your policies are on strategy and there are no redundancies, we also can readily uncover savings. These days, life insurance policies have become a commodity and For I’vedown beendueadvocating costs years have come to medical that investors stop life trying to catch advances, increased expectancies “alpha”. I encourage investors to and stiffer competition.

settle in and rely on an empirical Make your not New Year’s one approach, based onresolution speculation, that won’t just last the year or only but onyou. theLet irrefutable science of benefit us review your insurcapital markets. ance so you can feelInvesting secure and in helpa globally diversified, tax toand cost your family for many years come. efficient portfolio will prevail. –Tom Wiseman

The Medium is Paint on Canvas; the Message is on Facebook By Sophie Scheps For Middleburg Life

nthony Barham’s paintings have been shared hundreds of times, even if he doesn’t rent gallery space or host exhibitions of his wonderful creations. His studio and his computer are all that’s necessary to view his art. “I work a lot on Facebook,” Barham said. “That’s my gallery. One of my videos has been shared over a thousand times. The music is an old hunting song that was recorded on a wax cylinder in 1917.” The painting is of a jaunty fox smoking a pipe. The grey smoke pours out, creating scenes of hounds and horses running throughout the frame. The video of him painting the piece has been shared all over the world and although the painting was sold, he still gets requests from fox hunting enthusiasts. Barham often records time-lapse videos of his commissioned works to post on Facebook and his YouTube page. He spends hours selecting music to set the tone and presents the video along with the finished painting to his clients. To study the painting subjects themselves, Barham prefers to work from video. “Video is better because you can move around and it’s capturing thousand of photographs you can take from stills,” he said. “I put together pieces from different pictures to create something funny and show more life.” Barham has been doing animal commissions for twenty years. He prefers to do several small paintings to show different expressions instead of one larger piece. He often includes well-loved or recognizable objects from the owner’s home. And one client had an unusual request. “She has 17 dogs and cats that live with her and sleep on these little antique beds,” he said. “I had no idea what she was going to do but she asked me to paint six tiny paintings of each animal. Then she put them all together to create a table with a glass top in her kitchen.” When Barham initially came to the Middleburg area in the mid-1990s, he was best known for his floral paintings. He grew up on Portobello Road in London, where Barham’s father was an antique dealer. After he returned from World War II, he started the business in 1945. “In those days people would just give you stuff,” Barham said. “He was a French polisher before. They put the brown shiny finish on furniture. When he was 11 he would polish the inside of the wardrobes because he could fit inside.” Eventually the family owned three shops and had vast quantities of mostly damaged paintings. Barham would practice repairing the holes and cleaning them as a child. He said that’s where he learned most of his painting skills. “I still do a bit of restoration now,” he said. “They had oil lamps that smoke and the grease gets on the paintings and the varnish begins to turn yellow after a while. It’s not a hard process but you have to do it right.” Practicing on antique paintings eventually led Barham to create large and

A commissioned piece by Anthony Barham

Anthony Barham’s painting is of a jaunty fox smoking a pipe and has been set to music of an old hunting recording. The video of him painting the piece has been shared on social media all over the world.

intricate floral pieces. A regular client lived in Upperville and inspired him to make the move to Virginia. Barham married another well-known local artist, Misia Broadhead, and the two of them opened up their BroadheadBarham Studio located in their home in The Plains. They paint a variety of subjects, including portraits, landscapes and murals. “I always paint the same way no matter what it is,” Barham said. “The building up the colors and layers is the quickest way of doing it. It's a traditional way of painting. If you know exactly what you are doing you don't waste any time.” Several local children take painting lessons with Barham, including a sevenyear-old Hill School second-grader named Lilly Killinger. She created several beautiful firefly paintings displayed at the Common

Grounds in Middleburg to sell in order to raise money for a sick friend. “She made around $2,500 for cancer research,” Barham said. “Her father is an artist but she is really talented.” Barham also has his work on display at the Antique Emporium in Middleburg and at The Inn at Little Washington. He’ll be participating along with other local artists in the fifth annual Art of the Piedmont show Feb. 19 at the Middleburg Community Center. The reception features food and drink and a chance to mingle with local artists as they display their work for sale. A silent auction with blind bidding will take place throughout the evening. Winners will be announced at the conclusion of the event and proceeds benefit the Middleburg Montessori School, run by Beth Ann Slater. For the past four years, guests have enjoyed works by prominent local artists, including paintings, sculpture and oriental rugs.