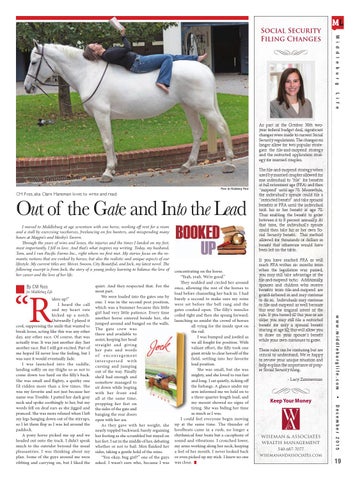 CM Foss, aka Clare Mansman loves to write and read.

Out of the Gate and Into the Lead I moved to Middleburg at age seventeen with one horse, working off rent for a room and a stall by exercising racehorses, freelancing on fox hunters, and misspending many hours at Magpie’s and Mosby’s Tavern. Through the years of wins and losses, the injuries and the times I landed on my feet, most importantly, I fell in love. And that’s what inspires my writing. Today, my husband, Tom, and I run Pacific Farms Inc., right where we first met. My stories focus on the romantic notions that are evoked by horses, but also the realistic and unique aspects of our lifestyle. My current titles are: Shiver, Swoon, City Beautiful, and Jock, my latest novel. The following excerpt is from Jock, the story of a young jockey learning to balance the love of her career and the love of her life. By CM Foss for Middleburg Life

and the restricted application stratFew investors have the necessary egy for married couples. combination of ability, time, capital and control over an investment The file-and-suspend strategy when to create “alpha”. Regardless of used by married couples allowed for experience, most investors have one individual to “file” for benefits these goals in mind: ability to live at full retirement age (FRA) and then on their portfolio’s income, saving “suspend” until age 70. Meanwhile, for child’s education theirfile own the aindividual’s spouseor could a retirement and making sure their “restricted benefit” and take spousal investments areuntil first-rate. benefits at FRA the individual took his or her benefit at age 70.

Most investors share the challenge Thus enabling the benefit to grow of capturing “return” of the between 6 to 8the percent annually. At capital markets, as opposed to that time, the individual’s spouse generating their own “alpha.” could then take his or her own SoProblem is, most investors never cial Security benefit. This method capture market’s entire return. allowed the for thousands of dollars in They the investment’s full benefitdon’t that get otherwise would have been leftrather on thethe table. return, investor’s return. What’s the difference? If you have reached FRA or will

grand-fathered in and may continue to do so. Individuals may continue to file-and-suspend as well because this was the original intent of the rule. If you turned 62 this year or are older you may still file a restricted benefit for only a spousal benefit starting at age 62; this allow you For years I’ve beenwilladvocating to draw on your that investors stopspouse’s trying tobenefit catch while yourI own continues to grow.to “alpha”. encourage investors

settle in and rely on an empirical These rulesnot canbased be confusing but are approach, on speculation, critical to understand. We’re happy but on the irrefutable science of to review your unique situation and capital markets. Investing in a help explain the importance of propglobally diversified, tax and cost er Social Security filing. efficient portfolio will prevail. - Lucy Zimmerman –Tom Wiseman

concentrating on the horse. “Yeah, yeah. We’re good.” They nodded and circled her around once, allowing the rest of the horses to load before channeling her back in. I had barely a second to make sure my reins were set before the bell rang and the gates crashed open. The filly’s muscles coiled tight and then she sprang forward, launching us amidst the crowd of horses all vying for the inside spot on the rail. I was bumped and jostled as we all fought for position. With valiant effort, the filly took one giant stride to clear herself of the field, settling into her favorite lead position. She was small, but she was mighty, and she loved to run fast and long. I sat quietly, ticking off the furlongs. A glance under my arm informed me we held on to a three-quarter-length lead, and my mount showed no signs of tiring. She was biding her time as much as I was. I could feel everyone begin moving up at the same time. The thunder of hoofbeats came in a rush, no longer a rhythmical four beats but a cacophony of sound and vibrations. I crouched lower, my arms working along her neck, keeping a feel of her mouth. I never looked back or even picked up my stick. I knew no one was close.

Carl a writer quoted in the reachRichards, FRA within six months from financial rags, calls this difference when the legislation was passed, “the behavior gap.”advantage Unfortunately, you may still take of the emotions can prohibit sound file-and-suspend tactic. Additionally, investment spouses anddecisions childrenand whoinvestors receive benefits file-and-suspend are buy and from sell when they shouldn’t.

iders up!” I heard the call and my heart rate kicked up a notch. Outwardly I played it cool, suppressing the smile that wanted to break loose, acting like this was any other day, any other race. Of course, that was actually true. It was just another day. Just another race. But I still got excited. Part of me hoped I’d never lose the feeling, but I was sure it would eventually fade. I was launched into the saddle, landing softly on my thighs so as not to come down too hard on the filly’s back. She was small and flighty, a quirky one I’d ridden more than a few times. She was my favorite and not just because her name was Trouble. I patted her dark gray neck and spoke soothingly to her, but my words fell on deaf ears as she jigged and pranced. She was more relaxed when I left my legs hanging down out of the stirrups, so I let them flop as I was led around the paddock. A pony horse picked me up and we headed out onto the track. I didn’t speak much to the outrider beyond the usual pleasantries. I was thinking about my plan. Some of the guys around me were ribbing and carrying on, but I liked the

quiet. And they respected that. For the most part. We were loaded into the gates one by one. I was in the second post position, which was a bummer because this little girl had very little patience. Every time another horse entered beside her, she jumped around and banged on the walls. The gate crew was there and available to assist, keeping her head straight and giving her pats and words of e n c ou r a ge m e nt i nt e r s p e r s e d w i t h cursing and jumping out of the way. Finally she’d had enough and somehow managed to sit down while leaping with her front end all at the same time, propping her feet on the sides of the gate and banging the rear doors open with her ass. As they gave with her weight, she nearly toppled backward, barely regaining her footing as she scrambled but stayed on her feet. I sat in the middle of her, debating whether or not to bail. Men flanked her sides, taking a gentle hold of the reins. “You okay, bug girl?” one of the guys asked. I wasn’t sure who, because I was

The term “alpha” has a lengthy Investopedia definition. In short, “alpha” is the excess return over As part of the October 30th twoan investment’s benchmark index year federal budget deal, significant return. Investors aim for “alpha”. changes were made to current Social Therefore, almost all Security regulations. Theinvestment changes no advisors feel that they get paid to longer allow for two popular stratechase “alpha”. gies: the file-and-suspend strategy