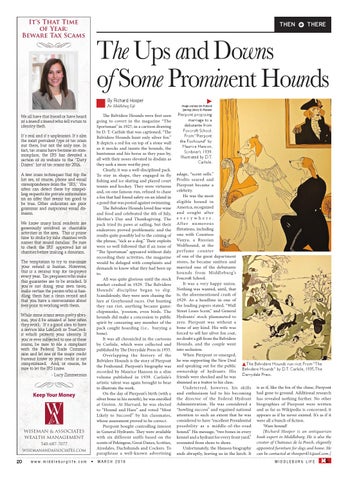 THE PURSUIT It’s That Time OF ALPHA of Year: Beware Tax Scams

The Ups and Downs of Some Prominent Hounds

The term “alpha” has a lengthy Investopedia definition. In short, “alpha” is the excess return over We have that friend or have heard an all investment’s benchmark index of a friend’s friend who to return. Investors aim fell for victim “alpha”. identity theft. Therefore, almost all investment advisors feel that they get paid to It’s real and it’s unpleasant. It’s also chase “alpha”. the most prevalent type of tax scam

By Richard Hooper For Middleburg Life The Belvidere Hounds were first seen going to covert in the magazine “The Sportsman” in 1927, in a cartoon drawing by D. T. Carlisle that was captioned, “The Belvidere Hounds hunt only silver fox.” It depicts a red fox on top of a stone wall as it mocks and taunts the hounds, the huntsman and his horse as they pass by, all with their noses elevated in disdain as they seek a more worthy prey. Clearly, it was a well-disciplined pack. To stay in shape, they engaged in fly fishing and ice skating and played court tennis and hockey. They were virtuous and, on one famous run, refused to chase a fox that had found safety on an island in a pond that was posted against swimming. The Belvidere Hounds loved fine wine and food and celebrated the 4th of July, Mother’s Day and Thanksgiving. The pack tried its paws at sailing, but their endeavors proved problematic and the results quite possibly led to the coining of the phrase, “sick as a dog.” Their exploits were so well followed that if an issue of “The Sportsman” appeared without duly recording their activities, the magazine would be deluged with complaints and demands to know what they had been up to. All was quite glorious until the stock market crashed in 1929. The Belvidere Hounds’ discipline began to slip. Scandalously, they were seen chasing the lure at Greyhound races. Out hunting they ran riot, anything became game: chipmunks, ‘possum, even birds. The hounds did make a concession to public spirit by censuring any member of the pack caught hoarding (i.e., burying a bone). It was all chronicled in the cartoons by Carlisle, which were collected and published by The Derrydale Press in 1935. Overlapping the history of the Belvidere Hounds is the story of Pierpont the Foxhound. Pierpont’s biography was recorded by Maurice Hanson in a slim volume published in 1939. Carlisle’s artistic talent was again brought to bear to illustrate the work. On the day of Pierpont’s birth (with a silver bone in his mouth), he was enrolled at Groton. At Harvard, he was elected to “Hound and Hare” and voted “Most Likely to Succeed” by his classmates, whose assessment proved to be correct. Pierpont bought controlling interest in General Hydrants. They were available with six different sniffs based on the scents of Pekingese, Great Danes, Scotties, Airedales, Dachshunds and Cockers. To paraphrase a well-known advertising

out but not thethe only one. In Fewthere, investors have necessary fact, tax scams have become so comcombination of ability, time, capital monplace, the IRS has devoted a and control over anto investment section of its website the “Dirty to create “alpha”. Regardless Dozen” list of tax scams for 2016. of

experience, most investors have

these mind: ability to live A few goals scam in techniques that top the list are, ofportfolio’s course, phone andsaving email on their income, correspondence from theor“IRS.” You for a child’s education their own often can detect these bysure compelretirement and making their ling requests for information investments areprivate first-rate. on an offer that seems too good to be true. Other indicators are poor Most investors share the challenge grammar and suspicious email of capturing the “return” of dothe mains. capital markets, as opposed to generating their own “alpha.”

We know many local residents are Problem is, most investors never generously involved in charitable capture the market’s entireis return. activities in the area. This prime They don’t get the investment’s full time to strike by fake charities with return,that rather the familiar. investor’sBe return. names sound sure to checkthe thedifference? IRS’ approved list of What’s charities before making a donation.

Carl Richards, a writer quoted in the financial rags, calls difference The temptation to trythis to maximize “the behavior Unfortunately, your refund isgap.” human. However, this is a serious for taxpayers emotions can trap prohibit sound every year. Tax preparers make investment decisions andwho investors this are to be shouldn’t. avoided. If buy guarantee and sell when they you’re not doing your own taxes, make certain the person who is handling them has a clean record and that you have a conversation about fees prior to working with them.

While some scams seem pretty obvious, you’d be amazed at how often For work. years It’s I’vea good been idea advocating they to have that investors stop trying to catch a service like LifeLock or TrueCred“alpha”. I encourage to it which protects your investors identity. If settle in and rely ontoan you’re ever subjected oneempirical of these scams, be not surebased to file complaint approach, on aspeculation, with thethe Federal Trade science Commisbut on irrefutable of sion and let one of the major capital markets. Investing credit in a bureaus know so your credit is not globally diversified, tax and cost compromised. And, of course, be efficient portfolio will prevail. sure to let the IRS know.

Pierpont proposing marriage to a debutante from Foxcroft School. From “Pierpont the Foxhound” by Maurice Hanson, Scribner’s 1939. Illustrated by D. T. Carlisle.

adage, “scent sells.” Profits soared and Pierpont became a celebrity. He was the most eligible hound in America, recognized and sought after everywhere. Af te r nu me rous flirtations, including one with Countess Vanya, a Russian Wolfhound, at the perfume counter of one of the great department stores, he became smitten and married one of the debutante hounds from Middleburg’s Foxcroft School. It was a very happy union. Nothing was wanted, until, that is, the aforementioned crash of 1929. As a headline in one of the leading papers stated, “Wall Street Loses Scent,” and General Hydrants’ stock plummeted to zero. Pierpont was without a bone of any kind. His wife was forced to sell her silver fox coat, no doubt a gift from the Belvidere Hounds, and the couple went into seclusion. When Pierpont re-emerged, he was supporting the New Deal The Belvidere Hounds run riot. From “The and speaking out for the public Belvidere Hounds” by D. T. Carlisle, 1935, The ownership of hydrants. His Derrydale Press. friends were shocked and he was shunned as a traitor to his class. Undeterred, however, his skills is as if, like the fox of the chase, Pierpont and enthusiasm led to his becoming had gone to ground. Additional research the director of the Federal Hydrant has revealed nothing further. No other Administration. He was considered a biographies of Pierpont were written “howling success” and regained national and as far as Wikipedia is concerned, it attention to such an extent that he was appears as if he never existed. It’s as if it considered to have “excellent Presidential were all a bunch of fiction. ‘Ware hound! possibility as a middle-of-the-road [Richard Hooper is an antiquarian hound.” His message, “two bones in every kennel and a hydrant for every front yard,” book expert in Middleburg. He is also the creator of Chateaux de la Pooch, elegantly resonated from shore to shore. Unfortunately, the Hanson biography appointed furniture for dogs and home. He ends abruptly, leaving us in the lurch. It can be contacted at rhooper451@aol.com.] MIDDLEBURG LIFE