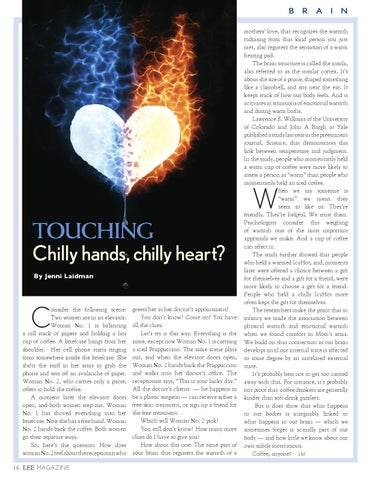 onsider the following scene: Two women are in an elevator. Woman No. 1 is balancing a tall stack of papers and holding a hot cup of coffee. A briefcase hangs from her shoulder. Her cell phone starts ringing from somewhere inside the briefcase. She shifts the stuff in her arms to grab the phone and sets off an avalanche of paper. Woman No. 2, who carries only a purse, offers to hold the coffee. A moment later the elevator doors open, and both women step out. Woman No. 1 has shoved everything into her briefcase. Now she has a free hand. Woman No. 2 hands back the coffee. Both women go their separate ways. So, here’s the question: How does woman No. 2 feel about the receptionist who

greets her at her doctor’s appointment? You don’t know? Come on! You have all the clues. Let’s try it this way: Everything is the same, except now Woman No. 1 is carrying a iced Frappuccino. The same scene plays out, and when the elevator doors open, Woman No. 2 hands back the Frappuccino and walks into her doctor’s office. The receptionist says, “This is your lucky day.” All the doctor’s clients — he happens to be a plastic surgeon — can receive either a free skin treatment, or sign up a friend for the free treatment. Which will Woman No. 2 pick? You still don’t know? How many more clues do I have to give you? How about this one: The same part of your brain that registers the warmth of a

mothers’ love, that recognizes the warmth radiating from that kind person you just met, also registers the sensation of a warm heating pad. The brain structure is called the insula, also referred to as the insular cortex. It’s about the size of a prune, shaped something like a clamshell, and sits near the ear. It keeps track of how our body feels. And it activates in situations of emotional warmth and during warm baths. Lawrence E. Williams of the University of Colorado and John A Bargh at Yale published a study last year in the preeminent journal, Science, that demonstrates this link between temperature and judgment. In the study, people who momentarily held a warm cup of coffee were more likely to assess a person as “warm” than people who momentarily held an iced coffee. hen we say someone is “warm” we mean they seem to like us. They’re friendly. They’re helpful. We trust them. Psychologists consider this weighing of warmth one of the most important appraisals we make. And a cup of coffee can affect it. The study further showed that people who held a warmed IcyHot, and, moments later were offered a choice between a gift for themselves and a gift for a friend, were more likely to choose a gift for a friend. People who held a chilly IcyHot more often kept the gift for themselves. The researchers make the point that in infancy we made the association between physical warmth and emotional warmth when we found comfort in Mom’s arms. We build on that connection as our brain develops until our internal state is affected to some degree by an unrelated external state. It’s probably best not to get too carried away with this. For instance, it’s probably not proof that coffee drinkers are generally kinder than soft-drink guzzlers. But it does show that what happens to our bodies is inarguably linked to what happens to our brain — which we sometimes forget is actually part of our body — and how little we know about our own subtle motivations. Coffee, anyone? -LM