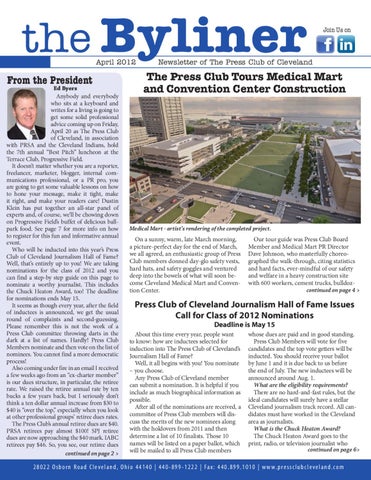 Ed Byers Anybody and everybody who sits at a keyboard and writes for a living is going to get some solid professional advice coming up on Friday, April 20 as The Press Club of Cleveland, in association with PRSA and the Cleveland Indians, hold the 7th annual “Best Pitch” luncheon at the Terrace Club, Progressive Field. It doesn’t matter whether you are a reporter, freelancer, marketer, blogger, internal communications professional, or a PR pro, you are going to get some valuable lessons on how to hone your message, make it tight, make it right, and make your readers care! Dustin Klein has put together an all-star panel of experts and, of course, we’ll be chowing down on Progressive Field’s buffet of delicious ballpark food. See page 7 for more info on how to register for this fun and informative annual event. Who will be inducted into this year’s Press Club of Cleveland Journalism Hall of Fame? Well, that’s entirely up to you! We are taking nominations for the class of 2012 and you can find a step-by step guide on this page to nominate a worthy journalist. This includes the Chuck Heaton Award, too! The deadline for nominations ends May 15. It seems as though every year, after the field of inductees is announced, we get the usual round of complaints and second-guessing. Please remember this is not the work of a Press Club committee throwing darts in the dark at a list of names. Hardly! Press Club Members nominate and then vote on the list of nominees. You cannot find a more democratic process! Also coming under fire in an email I received a few weeks ago from an “ex-charter member” is our dues structure, in particular, the retiree rate. We raised the retiree annual rate by ten bucks a few years back, but I seriously don’t think a ten dollar annual increase from $30 to $40 is “over the top,” especially when you look at other professional groups’ retiree dues rates. The Press Club’s annual retiree dues are $40. PRSA retirees pay almost $100! SPJ retiree dues are now approaching the $40 mark. IABC retirees pay $46. So, you see, our retiree dues continued on page 2 &gt;

Newsletter of The Press Club of Cleveland

On a sunny, warm, late March morning, a picture-perfect day for the end of March, we all agreed, an enthusiastic group of Press Club members donned day-glo safety vests, hard hats, and safety goggles and ventured deep into the bowels of what will soon become Cleveland Medical Mart and Convention Center.

Our tour guide was Press Club Board Member and Medical Mart PR Director Dave Johnson, who masterfully choreographed the walk-through, citing statistics and hard facts, ever-mindful of our safety and welfare in a heavy construction site with 600 workers, cement trucks, bulldozcontinued on page 4 &gt;

About this time every year, people want to know: how are inductees selected for induction into The Press Club of Cleveland’s Journalism Hall of Fame? Well, it all begins with you! You nominate – you choose. Any Press Club of Cleveland member can submit a nomination. It is helpful if you include as much biographical information as possible. After all of the nominations are received, a committee of Press Club members will discuss the merits of the new nominees along with the holdovers from 2011 and then determine a list of 10 finalists. Those 10 names will be listed on a paper ballot, which will be mailed to all Press Club members

whose dues are paid and in good standing. Press Club Members will vote for five candidates and the top vote getters will be inducted. You should receive your ballot by June 1 and it is due back to us before the end of July. The new inductees will be announced around Aug. 1. What are the eligibility requirements? There are no hard-and-fast rules, but the ideal candidates will surely have a stellar Cleveland journalism track record. All candidates must have worked in the Cleveland area as journalists. What is the Chuck Heaton Award? The Chuck Heaton Award goes to the print, radio, or television journalist who continued on page 6&gt;

Newsletter of the Press Club of Cleveland