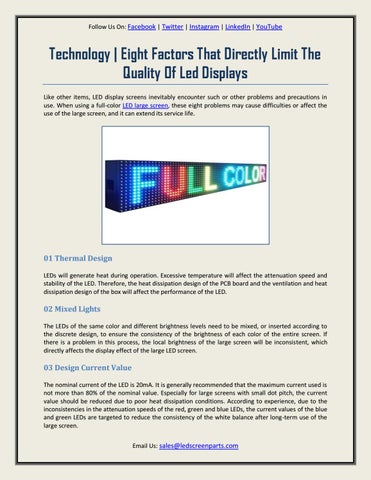 Technology | Eight Factors That Directly Limit The Quality Of Led Displays Like other items, LED display screens inevitably encounter such or other problems and precautions in use. When using a full-color LED large screen, these eight problems may cause difficulties or affect the use of the large screen, and it can extend its service life.

02 Mixed Lights The LEDs of the same color and different brightness levels need to be mixed, or inserted according to the discrete design, to ensure the consistency of the brightness of each color of the entire screen. If there is a problem in this process, the local brightness of the large screen will be inconsistent, which directly affects the display effect of the large LED screen.

03 Design Current Value The nominal current of the LED is 20mA. It is generally recommended that the maximum current used is not more than 80% of the nominal value. Especially for large screens with small dot pitch, the current value should be reduced due to poor heat dissipation conditions. According to experience, due to the inconsistencies in the attenuation speeds of the red, green and blue LEDs, the current values of the blue and green LEDs are targeted to reduce the consistency of the white balance after long-term use of the large screen. Email Us: sales@ledscreenparts.com

05 Control The Verticality Of The Lamp LED Control System For in-line LEDs, there must be sufficient process technology to ensure that the LEDs are perpendicular to the PCB board when passing through the furnace. Any deviation will affect the brightness consistency of the LEDs that have been set, and color patches with inconsistent brightness will appear.

06 Welding Control When the LED large screen is not lit, there is often more than 50% probability caused by various types of soldering, such as LED pin soldering, IC pin soldering, pin header soldering, and so on. The improvement of these problems requires rigorous process improvement and enhanced quality inspection to solve them. The vibration test before leaving the factory is also a good inspection method.

07 Wave Soldering Temperature and Time It is necessary to strictly control the temperature of the wavefront welding and the furnace overheating time. It is recommended that the preheating temperature is 100 ° C ± 5 ° C and the maximum does not exceed 120 ° C, and the preheating temperature rise is required to be stable. The time is recommended to be no more than 3 seconds. Do not vibrate or impact the LED after the furnace is heated until it returns to normal temperature. The temperature parameters of the wave soldering machine should be checked regularly. This is determined by the characteristics of the LED. Overheating or fluctuating temperature will directly damage the LED or cause hidden danger to the quality of the LED, especially for small and round LEDs such as 3mm. 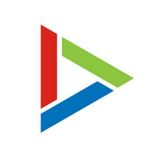 LEDs will generate heat during operation. Excessive temperature will affect the attenuation speed and stability of the LED. Therefore, the h...

LEDs will generate heat during operation. Excessive temperature will affect the attenuation speed and stability of the LED. Therefore, the h...