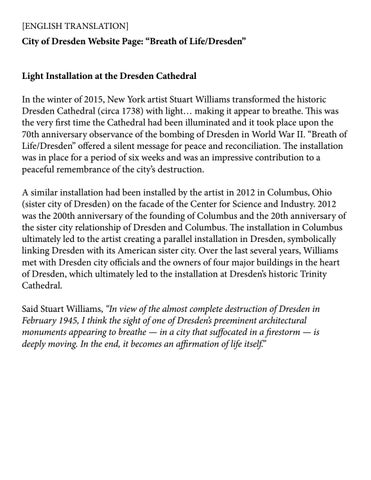 City of Dresden Website Page: “Breath of Life/Dresden” Light Installation at the Dresden Cathedral In the winter of 2015, New York artist Stuart Williams transformed the historic Dresden Cathedral (circa 1738) with light… making it appear to breathe. This was the very first time the Cathedral had been illuminated and it took place upon the 70th anniversary observance of the bombing of Dresden in World War II. “Breath of Life/Dresden” offered a silent message for peace and reconciliation. The installation was in place for a period of six weeks and was an impressive contribution to a peaceful remembrance of the city’s destruction. A similar installation had been installed by the artist in 2012 in Columbus, Ohio (sister city of Dresden) on the facade of the Center for Science and Industry. 2012 was the 200th anniversary of the founding of Columbus and the 20th anniversary of the sister city relationship of Dresden and Columbus. The installation in Columbus ultimately led to the artist creating a parallel installation in Dresden, symbolically linking Dresden with its American sister city. Over the last several years, Williams met with Dresden city officials and the owners of four major buildings in the heart of Dresden, which ultimately led to the installation at Dresden’s historic Trinity Cathedral. Said Stuart Williams, “In view of the almost complete destruction of Dresden in February 1945, I think the sight of one of Dresden’s preeminent architectural monuments appearing to breathe — in a city that suffocated in a firestorm — is deeply moving. In the end, it becomes an affirmation of life itself.” English Translation of City of Dresden Webpage on "Breath of Life/Dresden.”

English Translation of City of Dresden Webpage on "Breath of Life/Dresden.”