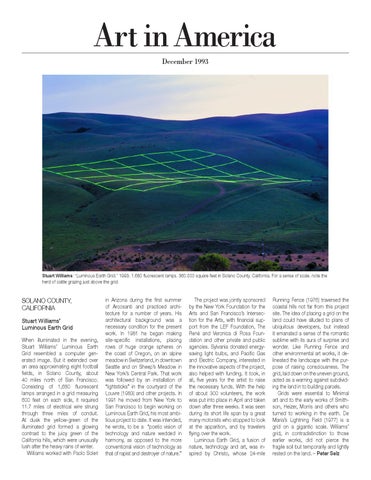 SOLANO COUNTY, CALIFORNIA Stuart Williams’ Luminous Earth Grid When illuminated in the evening, Stuart Williams’ Luminous Earth Grid resembled a computer generated image. But it extended over an area approximating eight football fields, in Solano County, about 40 miles north of San Francisco. Consisting of 1,680 fluorescent lamps arranged in a grid measuring 600 feet on each side, it required 11.7 miles of electrical wire strung through three miles of conduit. At dusk the yellow-green of the illuminated grid formed a glowing contrast to the juicy green of the California hills, which were unusually lush after the heavy rains of winter. Williams worked with Paolo Soleri

in Arizona during the first summer of Arcosanti and practiced architecture for a number of years. His architectural background was a necessary condition for the present work. In 1981 he began making site-specific installations, placing rows of huge orange spheres on the coast of Oregon, on an alpine meadow in Switzerland, in downtown Seattle and on Sheep’s Meadow in New York’s Central Park. That work was followed by an installation of “lightsticks” in the courtyard of the Louvre (1983) and other projects. In 1991 he moved from New York to San Francisco to begin working on Luminous Earth Grid, his most ambitious project to date. It was intended, he wrote, to be a “poetic vision of technology and nature wedded in harmony, as opposed to the more conventional vision of technology as that of rapist and destroyer of nature.”

The project was jointly sponsored by the New York Foundation for the Arts and San Francisco’s Intersection for the Arts, with financial support from the LEF Foundation, The René and Veronica di Rosa Foundation and other private and public agencies. Sylvania donated energysaving light bulbs, and Pacific Gas and Electric Company, interested in the innovative aspects of the project, also helped with funding. It took, in all, five years for the artist to raise the necessary funds. With the help of about 300 volunteers, the work was put into place in April and taken down after three weeks. It was seen during its short life span by a great many motorists who stopped to look at the apparition, and by travelers flying over the work. Luminous Earth Grid, a fusion of nature, technology and art, was inspired by Christo, whose 24-mile

Running Fence (1976) traversed the coastal hills not far from this project site. The idea of placing a grid on the land could have alluded to plans of ubiquitous developers, but instead it emanated a sense of the romantic sublime with its aura of surprise and wonder. Like Running Fence and other environmental art works, it delineated the landscape with the purpose of raising consciousness. The grid, laid down on the uneven ground, acted as a warning against subdividing the land in to building parcels. Grids were essential to Minimal art and to the early works of Smithson, Heizer, Morris and others who turned to working in the earth. De Maria’s Lightning Field (1977) is a grid on a gigantic scale. Williams’ grid, in contradistinction to those earlier works, did not pierce the fragile soil but temporarily and lightly rested on the land. – Peter Selz Review in Art in America

Review in Art in America