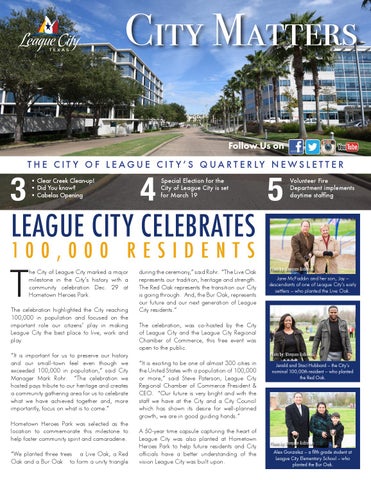 he City of League City marked a major milestone in the City’s history with a community celebration Dec. 29 at Hometown Heroes Park.

The celebration highlighted the City reaching 100,000 in population and focused on the important role our citizens’ play in making League City the best place to live, work and play. “It is important for us to preserve our history and our small-town feel even though we exceeded 100,000 in population,” said City Manager Mark Rohr. “The celebration we hosted pays tribute to our heritage and creates a community gathering area for us to celebrate what we have achieved together and, more importantly, focus on what is to come.” Hometown Heroes Park was selected as the location to commemorate this milestone to help foster community spirit and camaraderie. “We planted three trees – a Live Oak, a Red Oak and a Bur Oak – to form a unity triangle

during the ceremony,” said Rohr. “The Live Oak represents our tradition, heritage and strength. The Red Oak represents the transition our City is going through. And, the Bur Oak, represents our future and our next generation of League City residents.” The celebration, was co-hosted by the City of League City and the League City Regional Chamber of Commerce, this free event was open to the public. “It is exciting to be one of almost 300 cities in the United States with a population of 100,000 or more,” said Steve Paterson, League City Regional Chamber of Commerce President & CEO. “Our future is very bright and with the staff we have at the City and a City Council which has shown its desire for well-planned growth, we are in good guiding hands.” A 50-year time capsule capturing the heart of League City was also planted at Hometown Heroes Park to help future residents and City officials have a better understanding of the vision League City was built upon.

Jane McFaddin and her son, Jay – descendants of one of League City’s early settlers – who planted the Live Oak. 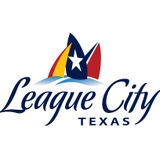 The City of League City marked a major milestone in the City’s history with a community celebration Dec. 29 at Hometown Heroes Park.

The City of League City marked a major milestone in the City’s history with a community celebration Dec. 29 at Hometown Heroes Park.