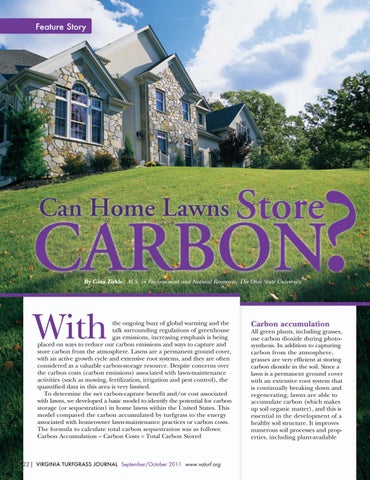 By Gina Zirkle, M.S. in Environment and Natural Resources, The Ohio State University

the ongoing buzz of global warming and the talk surrounding regulations of greenhouse gas emissions, increasing emphasis is being placed on ways to reduce our carbon emissions and ways to capture and store carbon from the atmosphere. Lawns are a permanent ground cover, with an active growth cycle and extensive root systems, and they are often considered as a valuable carbon-storage resource. Despite concerns over the carbon costs (carbon emissions) associated with lawn-maintenance activities (such as mowing, fertilization, irrigation and pest control), the quantified data in this area is very limited. To determine the net carbon-capture benefit and/or cost associated with lawns, we developed a basic model to identify the potential for carbon storage (or sequestration) in home lawns within the United States. This model compared the carbon accumulated by turfgrass to the energy associated with homeowner lawn-maintenance practices or carbon costs. The formula to calculate total carbon sequestration was as follows: Carbon Accumulation â&amp;#x20AC;&amp;#x201C; Carbon Costs = Total Carbon Stored

All green plants, including grasses, use carbon dioxide during photosynthesis. In addition to capturing carbon from the atmosphere, grasses are very efficient at storing carbon dioxide in the soil. Since a lawn is a permanent ground cover with an extensive root system that is continually breaking down and regenerating, lawns are able to accumulate carbon (which makes up soil organic matter), and this is essential in the development of a healthy soil structure. It improves numerous soil processes and properties, including plant-available