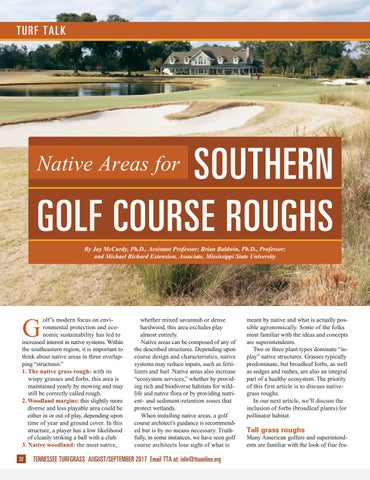 olf ’s modern focus on environmental protection and economic sustainability has led to increased interest in native systems. Within the southeastern region, it is important to think about native areas in three overlapping “structures.” 1. T he native grass rough: with its wispy grasses and forbs, this area is maintained yearly by mowing and may still be correctly called rough. 2. Woodland margins: this slightly more diverse and less playable area could be either in or out of play, depending upon time of year and ground cover. In this structure, a player has a low likelihood of cleanly striking a ball with a club. 3. Native woodland: the most native,

whether mixed savannah or dense hardwood, this area excludes play almost entirely. Native areas can be composed of any of the described structures. Depending upon course design and characteristics, native systems may reduce inputs, such as fertilizers and fuel. Native areas also increase “ecosystem services,” whether by providing rich and biodiverse habitats for wildlife and native flora or by providing nutrient- and sediment-retention zones that protect wetlands. When installing native areas, a golf course architect’s guidance is recommended but is by no means necessary. Truthfully, in some instances, we have seen golf course architects lose sight of what is

meant by native and what is actually possible agronomically. Some of the folks most familiar with the ideas and concepts are superintendents. Two or three plant types dominate “inplay” native structures. Grasses typically predominate, but broadleaf forbs, as well as sedges and rushes, are also an integral part of a healthy ecosystem. The priority of this first article is to discuss nativegrass roughs. In our next article, we’ll discuss the inclusion of forbs (broadleaf plants) for pollinator habitat.