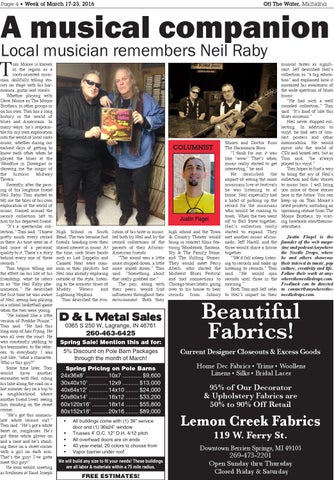 Off The Water, Michiana

om Moore is known in the region as a roots-oriented musician, skillfully telling stories on stage with his harmonica, guitar and vocals. Whether playing with Dave Moore as The Moore Brothers, in other groups or on his own, Tom has a long history in the world of blues and Americana. In many ways, he’s responsible for my own exploration into the world of local roots music, whether during our earliest days of getting to know each other when he played the blues at the Woodfire in Dowagiac or showing me the magic of the historic Midway Tavern. Recently, after the passing of his longtime friend Neil Raby, Tom started to tell me the tales of his own exploration of the world of music, framed around the record collection left to him by his departed friend. “It’s a spectacular collection,” Tom said. “I knew pretty much every record in there. As time went on it had more of a personal quality to it. There’s a story behind every one of these records.” Tom begins telling me the effect on his life of his friendship, what he refers to as “the Neil Raby phenomenon.” He described the first time he was aware of Neil, seeing him playing in a school basketball game when the two were young. “He looked like a little version of Freddie Prinze,” Tom said. “He had this long mop of hair flying. He was all over the court. He was constantly yakking to his teammates, to the referees, to everybody. I was just like, “what a character. Who is this guy?” Some time later, Tom would have another encounter with Neil, riding his bike along the road on a hot summer day on a trip to a neighborhood where another friend lived, seeing him standing on the street corner. “He’s got this immaculate white leisure suit,” Tom said. “He’s got a white beret on, sunglasses. He’s got these white gloves on and a cane and he’s standing there on a street corner with a girl on each arm. That’s the guy! I’ve gotta meet this guy!” He soon would, meeting as freshmen at Saint Joseph

Justin Flagel High School in South Bend. The two became fast friends, bonding over their shared interest in music. At the time, rock blues bands such as Led Zeppelin and Canned Heat were common in their playlists, but Neil was already exploring outside of the style, listening to the acoustic blues of Muddy Waters and Lightning Hopkins. Tom described the evo-

lution of his taste in music, led both by Neil and by the record collections of the parents of their AfricanAmerican friends. “The sound was a little more stripped down, a little more scaled down,” Tom said. “Something about that really grabbed me.” The pair, along with their peers, would find influences throughout their environment. Both their

We will build any size to fit your needs! These buildings are all labor & materials within a 75 mile radius.

high school and the Town & Country Theater would bring in concert films featuring Woodstock, Santana, Sly & The Family Stone, and The Rolling Stones. They would meet Perry Aberli, who started the Midwest Blues Festival and had connections to Chicago blues labels, going over to his house to hear records from Johnny

Shines and Doctor Ross The Harmonica Boss. “I think for me, it was like ‘wow.’ That’s when music really started to get interesting,” he said. He described the impact of seeing the same musicians live at festivals he was listening to at home. Neil especially had a habit of picking up the record for the musicians who would be coming to town. When the two went off to Ball State together, Neil’s collection really started to expand. They met another music aficionado, Jeff Harell, and the three would share a house together. “We’d fall asleep listening to records and wake up listening to records,” Tom said. “He would spin records until three in the morning.” Both Tom and Jeff refer to Neil’s impact on their

musical tastes as significant. Jeff described Neil’s collection as “a big education” and explained how it increased his awareness of the wide spectrum of blues music. “He had such a well rounded collection,” Tom said. “It’s kind of like this blues museum.” Neil never stopped collecting. In addition to vinyl, he had sets of concert posters and other memorabilia. He would move into the world of CDs and boxed sets, but as Tom said, “he always played his vinyl.” Tom hopes to find a way to bring the joy of Neil’s collection and their stories to music fans. I will bring you more of those stories here in the future. You can keep up on Tom Moore’s latest projects, including an upcoming release from The Moore Brothers, by visiting facebook.com/themoorebrothers. Justin Flagel is the founder of the web magazine and podcast Anywhere the Needle Drops, where he and others showcase their interest in music, pop culture, creativity and life. Follow their work at anywheretheneedledrops.com. Feedback can be directed to contact@anywheretheneedledrops.com. 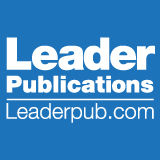 The Place to be Entertained. Leader Publications

The Place to be Entertained. Leader Publications