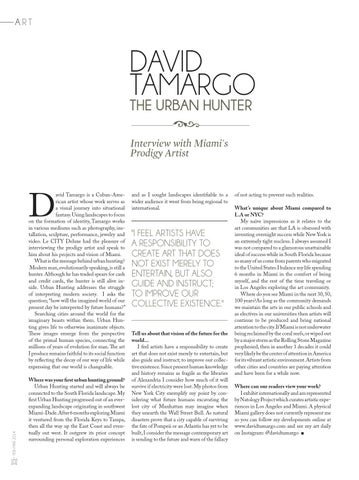 avid Tamargo is a Cuban-American artist whose work serves as a visual journey into situational fantasy. Using landscapes to focus on the formation of identity, Tamargo works in various mediums such as photography, installation, sculpture, performance, jewelry and video. Le CITY Deluxe had the pleasure of interviewing the prodigy artist and speak to him about his projects and vision of Miami. What is the message behind urban hunting? Modern man, evolutionarily speaking, is still a hunter. Although he has traded spears for cash and credit cards, the hunter is still alive inside.  Urban Hunting  addresses the struggle of interpreting modern society.    I asks the question; “how will the imagined world of our present day be interpreted by future humans?” Searching cities around the world for the imaginary beasts within them.  Urban Hunting gives life to otherwise inanimate objects. These images emerge from the perspective of the primal human species, connecting the millions of years of evolution for man. The art I produce remains faithful to its social function by reflecting the decay of our way of life while expressing that our world is changeable.    Where was your first urban hunting ground? Urban Hunting started and will always be connected to the South Florida landscape. My first Urban Hunting progressed out of an everexpanding landscape originating in southwest Miami-Dade. After 6 months exploring Miami it ventured from the Florida Keys to Tampa, then all the way up the East Coast and eventually out west. It outgrew its prior concept surrounding personal exploration experiences

and as I  sought landscapes identifiable to a wider audience it went from being regional to international.

of not acting to prevent such realities. What’s unique about Miami compared to L.A or NYC? My naïve impressions as it relates to the art communities are that LA is obsessed with inventing overnight success while New York is an extremely tight nucleus. I always assumed I was not compared to a glamorous unattainable ideal of success while in South Florida because so many of us come from parents who migrated to the United States.I balance my life spending 6 months in Miami in the comfort of being myself, and the rest of the time traveling or in Los Angeles exploring the art community.  Where do you see Miami in the next 30, 50, 100 years?As long as the community demands we maintain the arts in our public schools and as electives in our universities then artists will continue to be produced and bring national attention to the city. If Miami is not underwater being reclaimed by the coral reefs, or wiped out by a major storm as the Rolling Stone Magazine prophesied, then in another 3 decades it could very likely be the center of attention in America for its vibrant artistic environment. Artists from other cities and countries are paying attention and have been for a while now.   Where can our readers view your work? I exhibit internationally and am represented by Natology Project which curates artistic experiences in Los Angeles and Miami. A physical Miami gallery does not currently represent me so you can follow my developments online at www.davidtamargo.com and see my art daily on Instagram: @davidtamargo 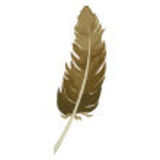