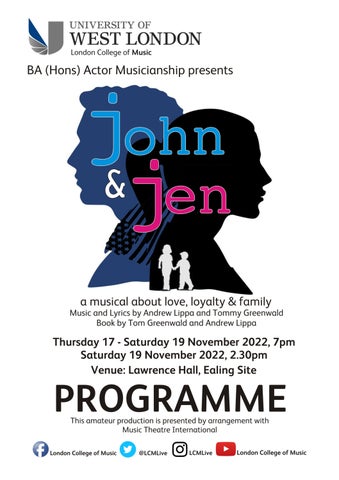 Set in America between 1950-1990, &#39;John &amp; Jen&#39; follows the sibling relationship of John and Jen Tracy and the challenges that come with this relationship. As they deal with the ever-changing world of midcentury America, the country is divided between those that support the Vietnam war and those that protest it, causing strain on this once close relationship. Act 2 follows Jen&#39;s relationship with her son, John, as he tries to navigate the aftermath of his mother and uncle&#39;s tumultuous relationship. John and Jen can be cast is a variety of ways. Usually cast as a two-hander in past productions such as Multitude of Drops Theatre Company and Broadway HD, this piece also allows for up to 2� actors to tell this story. The role of John has been divided between Michael Wieclawski and Tom Gibson, resulting in a clear separation of these characters, John (Jen&#39;s brother) and John (Jen&#39;s son), allowing the audience to fully experience these characters as individuals. The role of Jen has been divided between Scarlett Foley, Maria Konior, Amy Mclellan, Ziqi Huang and George Patria. With the intention of highlighting and exploring Jen&#39;s chaotic journey through Act 1, Act 2 is indicative of her psycological turmoil and slow decline into mental instability.