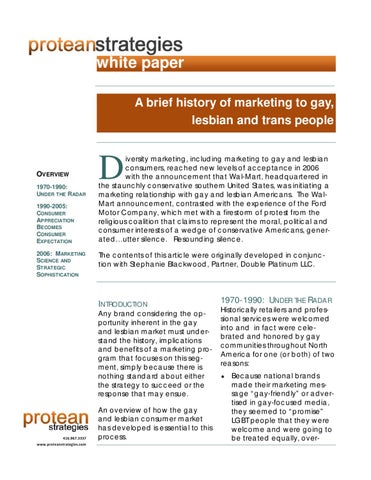 white paper A brief history of marketing to gay, lesbian and trans people

iversity marketing, including marketing to gay and lesbian consumers, reached new levels of acceptance in 2006 with the announcement that Wal-Mart, headquartered in the staunchly conservative southern United States, was initiating a marketing relationship with gay and lesbian Americans. The WalMart announcement, contrasted with the experience of the Ford Motor Company, which met with a firestorm of protest from the religious coalition that claims to represent the moral, political and consumer interests of a wedge of conservative Americans, generated…utter silence. Resounding silence. The contents of this article were originally developed in conjunction with Stephanie Blackwood, Partner, Double Platinum LLC.

INTRODUCTION Any brand considering the opportunity inherent in the gay and lesbian market must understand the history, implications and benefits of a marketing program that focuses on this segment, simply because there is nothing standard about either the strategy to succeed or the response that may ensue.

An overview of how the gay and lesbian consumer market has developed is essential to this process.

1970-1990: UNDER THE RADAR Historically retailers and professional services were welcomed into and in fact were celebrated and honored by gay communities throughout North America for one (or both) of two reasons: ♦

Because national brands made their marketing message “gay-friendly” or advertised in gay-focused media, they seemed to “promise” LGBT people that they were welcome and were going to be treated equally, over-

coming a history of overt and covert discrimination. ♦

As with any community there is a chauvinistic preference to do “business with our own” and therefore gay-owned and operated businesses that advertised to the community made it clear that they were intrinsically part of the community.

What astounded these early mainstream brand marketers – specifically beer and alcohol beverage brands, which were the first to focus on gay and lesbian consumers -- was how much product was being consumed in gay establishments and how minimal were the direct and indirect sales costs attached. In the general market, brewers spent fortunes building brands and even more in rebates and special incentives to straight clubs and bars in exchange for promotional considerations. Meanwhile, gay bars just bought the product and sold staggering volumes, making no demands on their sales allowances or profit margins. It would not be pure fantasy to suggest these distributors knowingly took advantage of the marginalized nature of the segment and believed they were doing gay communities a favor by “allowing” their brands to be sold in gay bars and clubs. Until, that is, the 1980s when AIDS hit

the LGBT communities and this cozy arrangement started to crumble: gay bars and clubs demanded support from marketers for fundraising events, linking throughput to input as directly as did general market establishments. Once forced into supporting sales in the community, beer and alcohol brands discovered they were subject to the same forces of brand preference as in the general market. Gay and lesbian-focused brand advertising was born.

1990-2005: CONSUMER APPRECIATION BECOMES CONSUMER EXPECTATION Behind the very obvious success of the beer and liquor brands, a wide variety of other brands saw the potential of the gay and lesbian segment. To the degree that they dared in a discriminatory and politically volatile environment, brands started targeting gay consumers. Over time, increasing tolerance and understanding of AIDS allowed many brands to reach out. Supporting AIDS causes was an effective way of raising their hands in front of the community. The political risk was low. (“We don’t actually support homosexuals, but as a God-fearing company, we see it as our duty to help stop this epidemic.”) And the cost of this support, while not as low as it had been, bordered on exploitive, compared to general marPage 2

Initially it was enough to donate and communicate messages of support in advertising, but as more and more brands recognized the opportunity and the gay space became cluttered, the rules of engagement changed. Standing out became necessary and consequently the marketing campaigns became increasingly more creative and interesting. And effective. Companies found that appealing to the LGBT community made economic sense. It was good business. Gradually advertising dollars moved from an AIDS focus to general awareness strategies. Research showed repeatedly that that the segment would respond to marketing that was directed toward gay and lesbian consumers because they felt desired, understood, safer and more comfortable doing business with brands that recognized them for who they were. These brands were also implicitly promising not to discriminate. It was a clear quid pro quo: support for the community translated to the bottom line. A side benefit of this process was the propagation of the myth that the LGBT community was large and more affluent than other market segments. While the research was always a bit vague and certainly suspect to anyone

who understood research, two important aspects consistently showed up as conclusions: There were many gay and lesbian people. Their discretionary income was above average because they did not have kids to support. Based on this alone, smart marketers started developing products they believed met specific needs of gay and lesbian people, with a much greater emphasis on men because most of the consumers surveyed were gay men: grooming products, travel products such as cruises or resorts, ethical drugs, an occasional gay-named beer or alcohol beverage. These new revenue potentials spurred an increase in the range and quality of gay media, which in turn boosted marketing interest in the segment. A final combination of influences rocketed this deliriumâ&#x20AC;&#x201D;by both the LGBT community and corporate community--to new heights: as companies started to come to grips with the presence of and need for acceptance of diversity in the workplace, they found that equal treatment of LGBT employees was a perfect springboard for brand entry into the LGBT marketplace with either advertising or fully integrated marketing campaigns. Change was inevitable, as is always true of marketplace dyPage 3

The third era, which is just

namics. As the second LGBT marketing era expanded, or possibly because of it, two counter-trends started emerging: ♦

beginning, Demands marketing treatment equivalent to any other Market Segment: the same business case, the same Strategic approach and the same level of professional, profit-focused expertise

Advertising to LGBT consumers– so called “targeting”– started to evidence diminishing returns because many brands were stepping into the space. The clutter was growing. LGBT consumers started feeling less marginalized and therefore less prone to evaluate brand preference solely on the “gay-friendliness factor.

2006: MARKETING SCIENCE AND STRATEGIC SOPHISTICATION As soon as it became evident that just showing up was no longer satisfactory, brand marketers started to ask the really hard question: Is our investment in the LGBT segment really paying off?, The third era, which is just beginning, demands marketing treatment equivalent to any other market segment, i. e., the same business case, the same strategic approach and the same level of professional, profit-focused expertise. What remains to be seen is how far brands are willing to go to develop strategies that are intelligent, consumer-centric and include experientially based go-to -market strategies, or whether

LGBT marketing will be allowed to wither away, driven into disrepute by the continuation of outmoded strategies, such as: “Look, we’re a mainstream brand, and we believe in diversity, so this multicultural campaign will work for gay consumers too.”

Or “Consumers know our brand. We can get away with changing a copy line to a double entendre. That will work for gay consumers. Never mind about the lesbians.”

Or “While we finally know that sexist advertising does not spur brand development in the general market, LGBT is all about sex, so we’ll wrap our message up in some inappropriate sexually provocative imagery.”

Or “We really want to do business with you but we’re not prepared to invest in the same proportion as we do in the “real” market, so we’ll just use the same tired stock photos of gay men and third rate gay copy and you’ll love it because the men are cute.”

When we ask gay and lesbian consumers what they think about these strategies, they tell us, in no uncertain terms, that they are offended. The third era of LGBT marketing is defined by 6 precepts that govern the decision as to whether a LGBT niche plan makes business sense, and subsequently, the degree to which it succeeds:

Corporations that have demonstrated they value diversity and brands that have engaged in consumer dialogue that builds equity will succeed with both the LGBT segment and in the increasingly diverse General marketplace.

1. Gays, lesbians and transgender people are not homogenous – they fall into demographic, psychographic and social subgroups, as do all other consumers. The simplistic common difference (being gay) is no longer a glue that binds. 2. In the segment, 40% to 45% are lesbians, and generalities regarding their desirability as a market force are inoperative. Lesbians span the socioeconomic spectrum in the same way as gay men; hold increasingly senior positions in small and large companies; are entrepreneurs and retirees, as much as any other group. It no longer makes sense to disregard 40% of the $690 billion LGBT marketplace. 3. The ghetto walls have crumbled, and gay people can be found living and working all over the city. For a number of social and political reasons, the need to live together in a geographic community has receded. What were formerly gay villages are increasingly being gentrified and occupied by “open minded” straight people. 4. But, while the imperative for a geographic community has declined, the need for community has increased. “Gay-borhoods” are being replaced by on-line commu-

nities, which are as easily and more efficiently reached through interactive media than the old “gay-borhood” was reachable through traditional media. 5. In line with the changing socio-political climate, gays and lesbians are feeling more relaxed about being themselves, and are open to new products and services that help them express their selfactualized individuality.

CONCLUSION The emergence of marriage and “marriage-like” partnerships has opened up a market for gaytailored financial, legal and insurance products and services. In truth, LGBT marketing has not become easier. On the contrary, it has become more challenging. But, when strategically planned, it is less risky and with vastly more profit potential. Truth-telling by members of the LGBT community, news reporting, research and time have opened up the complex—and once mysterious and threatening—lives of modern LGBT consumers. Corporations that have demonstrated they value diversity and brands that have engaged in consumer dialogue that builds equity will succeed with both the LGBT consumer segment and in the increasingly diverse general marketplace.

Laurence Bernstein is the founder  and managing partner of Protean  Strategies. He has been a leading  proponent of the “new order of  differentiation” and has written  and lectured on the subject of  experiential branding and   intrinsic/extrinsic research  methodologies in Canada, the US  and China.  In partnership with Double Platinum Inc, Protean Strategies has  been responsible for developing niche marketing strategies in the  LGBT space for major global corporations including IBM, ING,  Allstate, Lexus, etc. Laurence has presented workshops and semi‐ nars on gay marketing in North America, Europe and Africa.  AS consultant to the International Gaya and Lesbian Chamber of  Commerce Protean developed the first global study of LGBT eco‐ nomic impact in all countries IGLCC has members in, and authored  the analysis and report on the second annual International Busi‐ ness Equality Index.   Laurence is the author of numerous articles and papers on LGBT  marketing and writes a monthly column for the IGLCC newsletter. 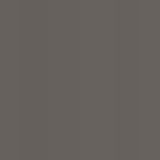 A brief history of gay marketing

LGBT marketing has progressed through three main "eras". An understanding of this evolution helps place new markets in context and gives gui...

A brief history of gay marketing

LGBT marketing has progressed through three main "eras". An understanding of this evolution helps place new markets in context and gives gui...