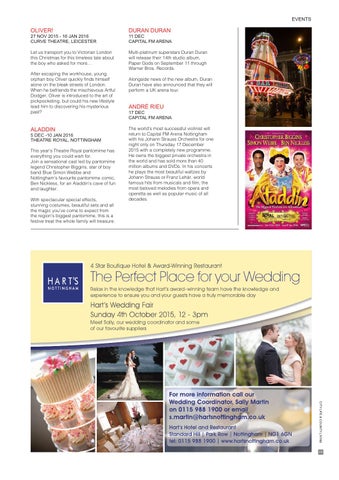 After escaping the workhouse, young orphan boy Oliver quickly finds himself alone on the bleak streets of London. When he befriends the mischievous Artful Dodger, Oliver is introduced to the art of pickpocketing, but could his new lifestyle lead him to discovering his mysterious past?

ALADDIN 5 DEC -10 JAN 2016 THEATRE ROYAL, NOTTINGHAM This year's Theatre Royal pantomime has everything you could wish for. Join a sensational cast led by pantomime legend Christopher Biggins, star of boy band Blue Simon Webbe and Nottingham's favourite pantomime comic, Ben Nickless, for an Aladdin's cave of fun and laughter. With spectacular special effects, stunning costumes, beautiful sets and all the magic you've come to expect from the region's biggest pantomime, this is a festive treat the whole family will treasure.

Alongside news of the new album, Duran Duran have also announced that they will perform a UK arena tour.

ANDRÉ RIEU 17 DEC CAPITAL FM ARENA The world's most successful violinist will return to Capital FM Arena Nottingham with his Johann Strauss Orchestra for one night only on Thursday 17 December 2015 with a completely new programme. He owns the biggest private orchestra in the world and has sold more than 40 million albums and DVDs. In his concerts he plays the most beautiful waltzes by Johann Strauss or Franz Lehár, world famous hits from musicals and film, the most beloved melodies from opera and operetta as well as popular music of all decades.