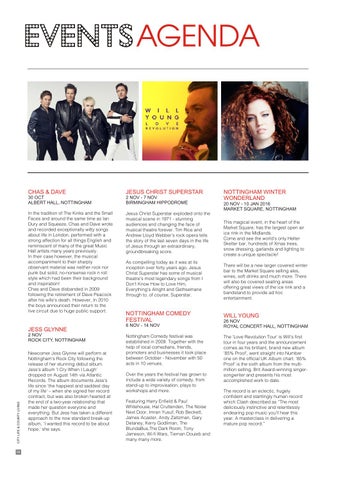 In the tradition of The Kinks and the Small Faces and around the same time as Ian Dury and Squeeze, Chas and Dave wrote and recorded exceptionally witty songs about life in London, performed with a strong affection for all things English and reminiscent of many of the great Music Hall artists many years previously. In their case however, the musical accompaniment to their sharply observant material was neither rock nor punk but solid, no-nonsense rock n roll style which had been their background and inspiration! Chas and Dave disbanded in 2009 following the retirement of Dave Peacock after his wife's death. However, In 2010 the boys announced their return to the live circuit due to huge public support.

Jesus Christ Superstar exploded onto the musical scene in 1971 - stunning audiences and changing the face of musical theatre forever. Tim Rice and Andrew Lloyd Webber's rock opera tells the story of the last seven days in the life of Jesus through an extraordinary, groundbreaking score.

Newcomer Jess Glynne will perform at Nottingham's Rock City following the release of her stunning debut album. Jess's album 'I Cry When I Laugh' dropped on August 14th via Atlantic Records. The album documents Jess's life since 'the happiest and saddest day of my life' – when she signed her record contract, but was also broken hearted at the end of a two-year relationship that made her question everyone and everything. But Jess has taken a different approach to the now standard break-up album, 'I wanted this record to be about hope,' she says.

As compelling today as it was at its inception over forty years ago, Jesus Christ Superstar has some of musical theatre's most legendary songs from I Don't Know How to Love Him, Everything's Alright and Gethsemane through to, of course, Superstar.

NOTTINGHAM COMEDY FESTIVAL 6 NOV - 14 NOV Nottingham Comedy festival was established in 2009. Together with the help of local comedians, friends, promoters and businesses it took place between October - November with 50 acts in 10 venues. Over the years the festival has grown to include a wide variety of comedy, from stand-up to improvisation, plays to workshops and more. Featuring Harry Enfield & Paul Whitehouse, Hal Cruttenden, The Noise Next Door, Imran Yusuf, Rob Beckett, James Acaster, Andy Zaltzman, Gary Delaney, Kerry Godliman, The BlundaBus,The Dark Room, Tony Jameson, Wi-fi Wars, Tiernan Douieb and many many more.

NOTTINGHAM WINTER WONDERLAND 20 NOV - 10 JAN 2016 MARKET SQUARE, NOTTINGHAM This magical event, in the heart of the Market Square, has the largest open air ice rink in the Midlands. Come and see the world's only Helter Skelter bar, hundreds of Xmas trees, snow dressing, garlands and lighting to create a unique spectacle! There will be a new larger covered winter bar to the Market Square selling ales, wines, soft drinks and much more. There will also be covered seating areas offering great views of the ice rink and a bandstand to provide ad hoc entertainment.

WILL YOUNG 26 NOV ROYAL CONCERT HALL, NOTTINGHAM The 'Love Revolution Tour' is Will's first tour in four years and the announcement comes as his brilliant, brand new album '85% Proof', went straight into Number one on the official UK Album chart. '85% Proof' is the sixth album from the multimillion selling, Brit Award-winning singersongwriter and presents his most accomplished work to date. The record is an eclectic, hugely confident and startlingly human record which Clash described as “The most deliciously instinctive and relentlessly endearing pop music you'll hear this year. A masterclass in delivering a mature pop record.”