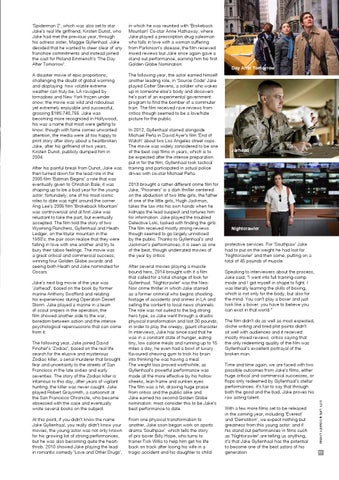 ‘Spiderman 2’, which was also set to star Jake’s real life girlfriend, Kirsten Dunst, who Jake had met the previous year, through his actress sister, Maggie Gyllenhaal. Jake decided that he wanted to steer clear of any franchise commitments and instead joined the cast for Roland Emmerich’s ‘The Day After Tomorrow’.

in which he was reunited with ‘Brokeback Mountain’ Co-star Anne Hathaway, where Jake played a prescription drug salesman who falls in love with a woman suffering from Parkinson’s disease, the film received mixed reviews but Jake once again gave a stand out performance, earning him his first Golden Globe Nomination.

A disaster movie of epic proportions, challenging the doubt of global warming and displaying how volatile extreme weather can truly be, LA ravaged by tornadoes and New York frozen under snow; the movie was wild and ridiculous yet extremely enjoyable and successful, grossing $186,740,799. Jake was becoming more recognised in Hollywood, his was a name that most were getting to know; though with fame comes unwanted attention, the media were all too happy to print story after story about a heartbroken Jake, after his girlfriend of two years, Kirsten Dunst, publicly dumped him in 2004.

The following year, the actor earned himself another leading role, in ‘Source Code’ Jake played Colter Stevens, a soldier who wakes up in someone else’s body and discovers he’s part of an experimental government program to find the bomber of a commuter train. The film received rave reviews from critics though seemed to be a love/hate picture for the public.

After his painful break from Dunst, Jake was then turned down for the lead role in the 2005 film ‘Batman Begins’ a role that was eventually given to Christian Bale, it was shaping up to be a bad year for the young actor; fortunately, one of his most iconic roles to date was right around the corner. Ang Lee’s 2005 film ‘Brokeback Mountain’ was controversial and at first Jake was reluctant to take the part, but eventually accepted. The film told the story of two Wyoming Ranchers, Gyllenhaal and Heath Ledger, on the titular mountain in the 1960’s; the pair soon realise that they were falling in love with one another and try to bury their taboo feelings. The movie was a great critical and commercial success, winning four Golden Globe awards and seeing both Heath and Jake nominated for Oscars.

In 2012, Gyllenhaal starred alongside Michael Peña in David Ayer’s film ‘End of Watch’ about two Los Angeles street cops. The movie was widely considered to be one of the best cop films in years, which is to be expected after the intense preparation put in for the film; Gyllenhaal took tactical training and participated in actual police drives with co-star Michael Peña. 2013 brought a rather different crime film for Jake, ‘Prisoners’ is a dark thriller centered on the abduction of two little girls, the father of one of the little girls, Hugh Jackman, takes the law into his own hands when he kidnaps the lead suspect and tortures him for information. Jake played the troubled Detective Loki, tasked with finding the girls. The film received mostly strong reviews though seemed to go largely unnoticed by the public. Thanks to Gyllenhaal’s and Jackman’s performances, it is seen as one of the best, though underrated movies of the year by critics.

At this point, if you didn’t know the name Jake Gyllenhaal, you really didn’t know your movies, the young actor was not only known for his growing list of strong performances, but he was also becoming quite the heartthrob. 2010 showed Jake playing the lead in romantic comedy ‘Love and Other Drugs’,

From one physical transformation to another, Jake soon began work on sports drama ‘Southpaw’ which tells the story of pro boxer Billy Hope, who turns to trainer Tick Willis to help him get his life back on track after losing his wife in a tragic accident and his daughter to child

Jake’s next big movie of the year was ‘Jarhead’, based on the book by former marine Anthony Swofford and relating his experiences during Operation Desert Storm. Jake played a marine in a team of scout snipers in the operation, the film showed another side to the war, boredom between action and the intense psychological repercussions that can come from it.

Nightcrawler protective services. For ‘Southpaw’ Jake had to put on the weight he had lost for ‘Nightcrawler’ and then some, putting on a total of 45 pounds of muscle. Speaking to interviewers about the process, Jake said, “I went into full training-camp mode and I got myself in shape to fight. I was literally learning the skills of boxing, which is not only for the body, but also for the mind. You can’t play a boxer and just look like a boxer; you have to believe you can exist in that world.” The film didn’t do as well as most expected, cliche writing and tired plot points didn’t sit well with audiences and it received mostly mixed reviews; critics saying that the only redeeming quality of the film was Gyllenhaal’s excellent portrayal of the broken man. Time and time again, we are faced with two possible outcomes from Jake’s films, either huge critical and commercial successes, or flops only redeemed by Gyllenhaal’s stellar performances; it’s fair to say that through both the good and the bad, Jake proves his raw acting talent. With a few more films set to be released in the coming year, including ‘Everest’ and ‘Demolition’, we expect nothing but greatness from this young actor; and if his stand out performances in films such as ‘Nightcrawler’ are telling us anything, it’s that Jake Gyllenhaal has the potential to become one of the best actors of his generation.

The following year, Jake joined David Fincher’s ‘Zodiac’, based on the real life search for the elusive and mysterious Zodiac killer, a serial murderer that brought fear and uncertainty to the streets of San Francisco in the late sixties and early seventies. The story of the Zodiac killer is infamous to this day, after years of vigilant hunting, the killer was never caught. Jake played Robert Graysmith, a cartoonist at the San Francisco Chronicle, who became obsessed with the case and eventually wrote several books on the subject.

After several movies playing a muscle bound hero, 2014 brought with it a film that called for a total change of look for Gyllenhaal. ‘Nightcrawler’ was the NeoNoir crime thriller in which Jake starred as a former criminal who begins shooting footage of accidents and crimes in LA and selling the content to local news channels. The role was not suited to the big strong hero type, so Jake went through a drastic physical transformation and lost 30 pounds, in order to play the creepy, gaunt character. In interviews, Jake has since said that he was in a constant state of hunger, eating tiny, low calorie meals and running up to 15 miles a day, he even had a bowl of luxury flavoured chewing gum to trick his brain into thinking he was having a meal. The weight loss proved worthwhile, as Gyllenhaal’s powerful performance was made all the more effective by his hollow cheeks, lean frame and sunken eyes. The film was a hit, drawing huge praise from critics and the public alike and Jake earned his second Golden Globe nomination; most consider this to be Jake’s best performance to date.