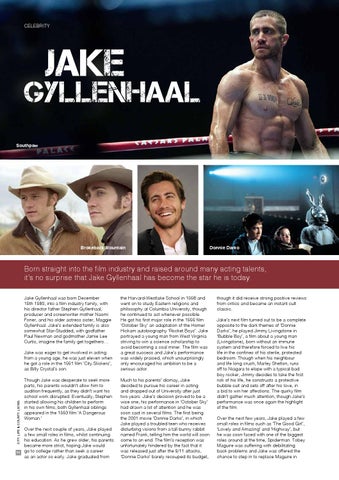 Born straight into the film industry and raised around many acting talents, it’s no surprise that Jake Gyllenhaal has become the star he is today. Jake Gyllenhaal was born December 19th 1980, into a film industry family, with his director father Stephen Gyllenhaal, producer and screenwriter mother Naomi Foner, and his older actress sister, Maggie Gyllenhaal. Jake’s extended family is also somewhat Star-Studded, with godfather Paul Newman and godmother Jamie Lee Curtis, imagine the family get togethers…

Jake was eager to get involved in acting from a young age, he was just eleven when he got a role in the 1991 film ‘City Slickers’, as Billy Crystal’s son.

Though Jake was desperate to seek more parts, his parents wouldn’t allow him to audition frequently, as they didn’t want his school work disrupted. Eventually, Stephen started allowing his children to perform in his own films, both Gyllenhaal siblings appeared in the 1993 film ‘A Dangerous Woman.’ Over the next couple of years, Jake played a few small roles in films, whilst continuing his education. As he grew older, his parents became more strict, hoping Jake would go to college rather than seek a career as an actor so early. Jake graduated from

the Harvard-Westlake School in 1998 and went on to study Eastern religions and philosophy at Columbia University, though he continued to act whenever possible. He got his first major role in the 1999 film ‘October Sky’ an adaptation of the Homer Hickam autobiography ‘Rocket Boys’. Jake portrayed a young man from West Virginia striving to win a science scholarship to avoid becoming a coal miner. The film was a great success and Jake’s performance was widely praised, which unsurprisingly only encouraged his ambition to be a serious actor. Much to his parents’ dismay, Jake decided to pursue his career in acting and dropped out of University after just two years. Jake’s decision proved to be a wise one, his performance in ‘October Sky’ had drawn a lot of attention and he was soon cast in several films. The first being the 2001 movie ‘Donnie Darko’, in which Jake played a troubled teen who receives disturbing visions from a tall bunny rabbit named Frank, telling him the world will soon come to an end. The film’s reception was unfortunately hindered by the fact that it was released just after the 9/11 attacks, ‘Donnie Darko’ barely recouped its budget,

though it did receive strong positive reviews from critics and became an instant cult classic. Jake’s next film turned out to be a complete opposite to the dark themes of ‘Donnie Darko’, he played Jimmy Livingstone in ‘Bubble Boy’, a film about a young man (Livingstone), born without an immune system and therefore forced to live his life in the confines of his sterile, protected bedroom. Though when his neighbour and life long crush, Marley Shelton, runs off to Niagara to elope with a typical bad boy rocker, Jimmy decides to take the first risk of his life, he constructs a protective bubble suit and sets off after his love, in a bid to win her affections. The quirky film didn’t gather much attention, though Jake’s performance was once again the highlight of the film. Over the next few years, Jake played a few small roles in films such as ‘The Good Girl’, ‘Lovely and Amazing’ and ‘Highway’, but he was soon faced with one of the biggest roles around at the time, Spiderman. Tobey Maguire was suffering with debilitating back problems and Jake was offered the chance to step in to replace Maguire in