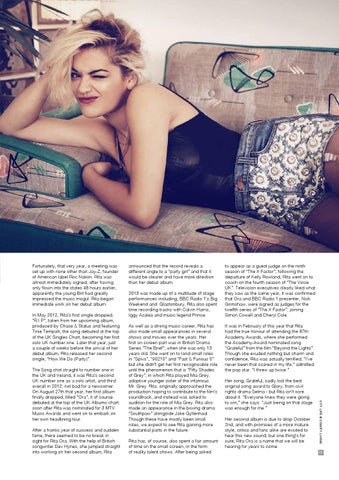 Fortunately, that very year, a meeting was set up with none other than Jay-Z, founder of American label Roc Nation. Rita was almost immediately signed, after having only flown into the states 48 hours earlier, apparently the young Brit had greatly impressed the music mogul. Rita began immediate work on her debut album. In May 2012, Rita’s first single dropped, “R.I.P”, taken from her upcoming album, produced by Chase & Status and featuring Tinie Tempah, the song debuted at the top of the UK Singles Chart, becoming her first solo UK number one. Later that year, just a couple of weeks before the arrival of her debut album, Rita released her second single, “How We Do (Party)”.

After a frantic year of success and sudden fame, there seemed to be no break in sight for Rita Ora. With the help of British songwriter Dev Hynes, she jumped straight into working on her second album, Rita

2013 was made up of a multitude of stage performances including, BBC Radio 1’s Big Weekend and Glastonbury, Rita also spent time recording tracks with Calvin Harris, Iggy Azalea and music legend Prince. As well as a strong music career, Rita has also made small appearances in several shows and movies over the years. Her first on screen part was in British Drama Series “The Brief”, when she was only 13 years old. She went on to land small roles in “Spivs”, “90210” and “Fast & Furious 6” but she didn’t get her first recognisable role until the phenomenon that is “Fifty Shades of Grey”, in which Rita played Mia Grey, adoptive younger sister of the infamous Mr. Grey. Rita originally approached the production hoping to contribute to the film’s soundtrack, and instead was asked to audition for the role of Mia Grey. Rita also made an appearance in the boxing drama “Southpaw” alongside Jake Gyllenhaal. Though these have mostly been small roles, we expect to see Rita gaining more substantial parts in the future. Rita has, of course, also spent a fair amount of time on the small screen, in the form of reality talent shows. After being asked

to appear as a guest judge on the ninth season of “The X Factor”, following the departure of Kelly Rowland, Rita went on to coach on the fourth season of “The Voice UK”. Television executives clearly liked what they saw as the same year, it was confirmed that Ora and BBC Radio 1 presenter, Nick Grimshaw, were signed as judges for the twelfth series of “The X Factor”; joining Simon Cowell and Cheryl Cole. It was in February of this year that Rita had the true honour of attending the 87th Academy Awards, where she performed the Academy-Award nominated song “Grateful” from the film “Beyond the Lights”. Though she exuded nothing but charm and confidence, Rita was actually terrified, “I’ve never been that scared in my life,” admitted the pop star. “I threw up twice.” Her song, Grateful, sadly lost the best original song award to Glory, from civil rights drama Selma - but Rita isn’t sore about it. “Everyone knew they were going to win,” she says. “Just being on that stage was enough for me.” Her second album is due to drop October 2nd, and with promises of a more mature style, critics and fans alike are excited to hear this new sound; but one thing’s for sure, Rita Ora is a name that we will be hearing for years to come.

The Song shot straight to number one in the UK and Ireland, it was Rita’s second UK number one as a solo artist, and third overall in 2012; not bad for a newcomer. On August 27th that year, her first album finally dropped, titled “Ora”, it of course debuted at the top of the UK Albums chart; soon after Rita was nominated for 3 MTV Music Awards and went on to embark on her own headlining tour.

announced that the record reveals a different angle to a “party girl” and that it would be clearer and have more direction than her debut album.