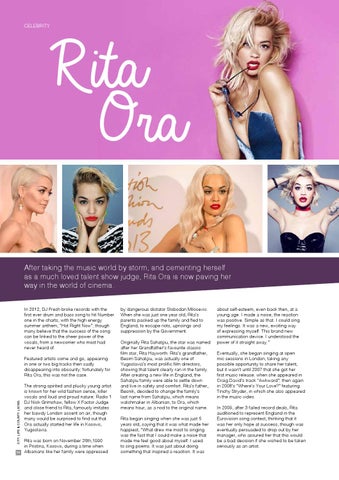 After taking the music world by storm, and cementing herself as a much loved talent show judge, Rita Ora is now paving her way in the world of cinema. In 2012, DJ Fresh broke records with the first ever drum and bass song to hit Number one in the charts, with the high energy summer anthem, “Hot Right Now”; though many believe that the success of the song can be linked to the sheer power of the vocals, from a newcomer who most had never heard of.

Featured artists come and go, appearing in one or two big tracks then sadly disappearing into obscurity; fortunately for Rita Ora, this was not the case.

The strong spirited and plucky young artist is known for her wild fashion sense, killer vocals and loud and proud nature; Radio 1 DJ Nick Grimshaw, fellow X Factor Judge and close friend to Rita, famously imitates her bawdy London accent on air, though many would be surprised to find out that Ora actually started her life in Kosovo, Yugoslavia. Rita was born on November 26th,1990 in Pristina, Kosovo, during a time when Albanians like her family were oppressed

by dangerous dictator Slobodan Milosevic. When she was just one year old, Rita’s parents packed up the family and fled to England, to escape riots, uprisings and suppression by the Government. Originally Rita Sahatçiu, the star was named after her Grandfather’s favourite classic film star, Rita Hayworth. Rita’s grandfather, Besim Sahatçiu, was actually one of Yugoslavia’s most prolific film directors, showing that talent clearly ran in the family. After creating a new life in England, the Sahatçiu family were able to settle down and live in safety and comfort. Rita’s father, Besnik, decided to change the family’s last name from Sahatçiu, which means watchmaker in Albanian, to Ora, which means hour, as a nod to the original name. Rita began singing when she was just 6 years old, saying that it was what made her happiest, “What drew me most to singing was the fact that I could make a noise that made me feel good about myself. I used to sing poems. It was just about doing something that inspired a reaction. It was

about self-esteem, even back then, at a young age. I made a noise, the reaction was positive. Simple as that. I could sing my feelings. It was a new, exciting way of expressing myself. This brand new communication device. I understood the power of it straight away.” Eventually, she began singing at open mic sessions in London, taking any possible opportunity to share her talent, but it wasn’t until 2007 that she got her first music release; when she appeared in Craig David’s track “Awkward”; then again in 2008’s “Where’s Your Love?” featuring Tinchy Stryder, in which she also appeared in the music video. In 2009, after 3 failed record deals, Rita auditioned to represent England in the Eurovision song contest, thinking that it was her only hope at success, though was eventually persuaded to drop out by her manager, who assured her that this would be a bad decision if she wished to be taken seriously as an artist.