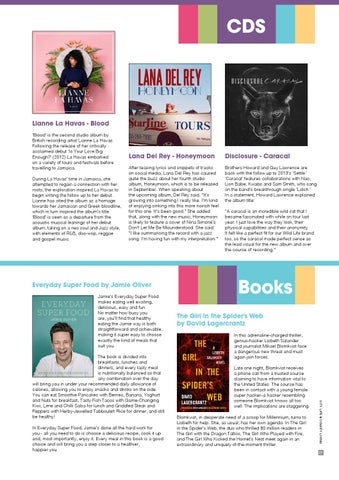 Lianne La Havas - Blood ‘Blood’ is the second studio album by British recording artist Lianne La Havas. Following the release of her critically acclaimed debut ‘Is Your Love Big Enough?’ (2012) La Havas embarked on a variety of tours and festivals before travelling to Jamaica. During La Havas’ time in Jamaica, she attempted to regain a connection with her roots, the exploration inspired La Havas to begin writing the follow up to her debut. Lianne has cited the album as a homage towards her Jamaican and Greek bloodline, which in turn inspired the album’s title. ‘Blood’ is seen as a departure from the acoustic musical leanings of her debut album, taking on a neo soul and Jazz style, with elements of R&B, doo-wop, reggae and gospel music.

After teasing lyrics and snippets of tracks on social media, Lana Del Rey has caused quite the buzz about her fourth studio album, Honeymoon, which is to be released in September. When speaking about the upcoming album, Del Rey said, “It’s growing into something I really like. I’m kind of enjoying sinking into this more noirish feel for this one. It’s been good.” She added that, along with the new music, Honeymoon is likely to feature a cover of Nina Simone’s Don’t Let Me Be Misunderstood. She said: “I like summarising the record with a jazz song. I’m having fun with my interpretation.”

Brothers Howard and Guy Lawrence are back with the follow up to 2013’s ‘Settle.’ ‘Caracal’ features collaborations with Nao, Lion Babe, Kwabs and Sam Smith, who sang on the band’s breakthrough single ‘Latch.’ In a statement, Howard Lawrence explained the album title:

Everyday Super Food by Jamie Oliver Jamie’s Everyday Super Food makes eating well exciting, delicious, easy and fun. No matter how busy you are, you’ll find that healthy eating the Jamie way is both straightforward and achievable, making it super easy to choose exactly the kind of meals that suit you.

In Everyday Super Food, Jamie’s done all the hard work for you - all you need to do is choose a delicious recipe, cook it up and, most importantly, enjoy it. Every meal in this book is a good choice and will bring you a step closer to a healthier, happier you.

Books The Girl in the Spider’s Web by David Lagercrantz In this adrenaline-charged thriller, genius-hacker Lisbeth Salander and journalist Mikael Blomkvist face a dangerous new threat and must again join forces. Late one night, Blomkvist receives a phone call from a trusted source claiming to have information vital to the United States. The source has been in contact with a young female super hacker–a hacker resembling someone Blomkvist knows all too well. The implications are staggering. Blomkvist, in desperate need of a scoop for Millennium, turns to Lisbeth for help. She, as usual, has her own agenda. In The Girl in the Spider’s Web, the duo who thrilled 80 million readers in The Girl with the Dragon Tattoo, The Girl Who Played with Fire, and The Girl Who Kicked the Hornet’s Nest meet again in an extraordinary and uniquely of-the-moment thriller.

The book is divided into breakfasts, lunches and dinners, and every tasty meal is nutritionally balanced so that any combination over the day will bring you in under your recommended daily allowance of calories, allowing you to enjoy snacks and drinks on the side. You can eat Smoothie Pancakes with Berries, Banana, Yoghurt and Nuts for breakfast, Tasty Fish Tacos with Game-Changing Kiwi, Lime and Chilli Salsa for lunch and Griddled Steak and Peppers with Herby-Jewelled Tabbouleh Rice for dinner, and still be healthy!

“A caracal is an incredible wild cat that I became fascinated with while on tour last year; I just love the way they look, their physical capabilities and their anonymity. It felt like a perfect fit for our Wild Life brand too, so the caracal made perfect sense as the lead visual for the new album and over the course of recording.”